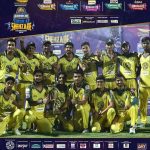 Earlier, it was slow left Armer Muhammad Salman who bagged five wickets to not only restrict the opponents on to a moderate total but also lifted the man of the match award in the final.

Hyderabad posted 140 runs while batting first after winning the toss.

Alongside Salman, who took five- wickets for 29 runs while off spinner Abrar Ahmed took two wickets for 18 runs scalps for Karachi.

In reply, Homage Karachi Ke Shehzade didn’t start off well with their openers falling after making just 22 runs but Fahaddis Bukhari and Bahdur Ali put together 57 runs on the scoreboard to seal the victory for Karachi made 141-5 in 16. 5 overs Fahaddis scored 47* of 43 Balls with four Fours while Bahadur Ali made 32*in 2 balls with two Fours and two Sixes.

Karachi Ke Shehzade received the cash prize of Rs 0.5 million with trophy for winning the tournament.

Hyderabad got the prize bag of Rs 0.25 million with trophy.

In individual performers received Rs.15000, Amad Alam with scoring 223 runs, named as the best batsman of the tournament.

The Governor Sindh, Imran Ismail was the Chief Guest at the closing ceremony of the tournament alongside Pakistan’s two legendary players Shahid Khan Afridi and Younis Khan.

“I really appreciate Karachi Kings to stage such a wonderful tournament which paved the way for youngsters to showcase their talent,” Imran Ismail said.

He also stressed the need for establishing cricket academies in all over Sindh to further promote cricket.

Former Test cricketer and Legendary batsman Younis Khan applauded the players who came from far away just to show their spirit and commitment/Sindh ke Shehzade.

On the other, the founder and CEO of ARY Network Salman Iqbal – owner of Karachi Kings congratulated the winning team and appreciated the management for providing such an excellent platform to the youngsters to shine.

“It never ceases to amaze us just how much talent there is in Pakistan.