Kuala Lumpur, Sept 16, 2018: Community ambassadors of all nationalities from across Asia came together at Zayed Sports City Stadium for a rousing evening of speeches, workshops and celebration, in the lead up to the AFC Asian Cup UAE 2019 (Playmakers).

Over 60 ambassadors or “Playmakers” representing 19 of the 24 competing nations were welcomed by HE Aref Al Awani, with the LOC Tournament Director challenging the group to deliver the best AFC Asian Cup in history, during the welcome event in the Royal Box of the 43,000-seat stadium, which will stage the highly-anticipated opener on January 5, 2019 as well as the final match on February 1, 2019. 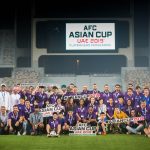 Addressing the group, His Excellency Aref Al Awani said: “Just as a football team needs players working in harmony, for us to succeed, the AFC Asian Cup UAE 2019 needs to be a tournament for every single football fan, from every country and culture across the continent.

I have no doubt that they will inspire others to do the same.”

Breaking off into small groups during the evening, the Playmakers worked together to brainstorm grassroots initiatives that would appeal and speak directly to their own communities.

“This is the biggest-ever AFC Asian Cup so it is a fantastic opportunity to showcase the sheer scope and scale of Asian football and the Playmakers is the perfect programme to bring everyone together.

“Having so many enthusiastic community ambassadors working together exemplifies the unifying power of football and the significant difference it holds to unite communities, not just in the UAE, but all across the continent.”

The diverse group of Playmakers at the welcome event included a Vice-President of a major company, an airline pilot, a nurse, several former professional footballers, coaches and more, all with a love for football and the desire to bring their nations together for the AFC Asian Cup UAE 2019.

As the tournament approaches, the Playmakers will be organising community events, posting on social media and ensuring that tickets are readily available to football fans from their respective nations.

Playmakers Speaking at the welcome event, Jessica Cullen, a cheerful 15-year-old football enthusiast who selected as a playmaker for Australia commented:

“My family and I have been following the Australian team since the last Asian Cup and now a lot of my non-Australian friends are really looking forward to seeing them come to the UAE in January to defend their title.

As Playmakers, we can spread the same spirit to bring people to cheer their countries and support their friends.”

There is still time for more football enthusiasts to become Playmakers and make a difference in their communities.

About the AFC Asian Cup:

The competition is the second-oldest continental football championship (after the Copa America) and was first held in 1956.

The 2019 tournament will be the second time the UAE has hosted the event, after successfully staging the finals in 1996.