Home  »  CRICKET   »   Simon Taufel to step down from elite panel 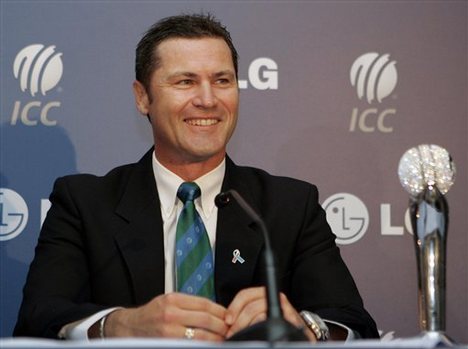 Colombo, Sept 26, 2012: The International Cricket Council (ICC) on Wednesday announced that Simon Taufel will step down from the Emirates Elite Panel of ICC Umpires at the end of the ICC World Twenty20 Sri Lanka 2012, which runs until 7 October, to take up the new role of ICC Umpire Performance and Training Manager.

In an outstanding career, Simon Taufel umpired in 74 Tests and 174 ODIs with his last Test and ODI appearances being at Lord’s a month ago in matches featuring England and South Africa.

Simon Taufel won the ICC Umpire of the Year award for five successive years from 2004 to 2008 and also had the honour of umpiring in the ICC Cricket World Cup 2011 final between India and Sri Lanka at Wankhede Stadium in Mumbai. He also stood in the finals of the ICC World Twenty20 2007 and 2009 in South Africa and England respectively, as well as in the final of the ICC Champions Trophy 2004 in England along with Rudi Koertzen.

Simon Taufel, announcing his decision, said: “Following the ICC World Twenty20 Sri Lanka 2012, I’m moving on from active international umpiring for personal and professional reasons. My wife and children have supported me immensely throughout my career and it is time for me to spend more time with them.

“My passion for cricket umpiring and personal professional development has shifted from on the field to off the field. In my new position as ICC Umpire Performance and Training Manager, I look forward to help create professional programmes and resources to support the current and future generations of cricket match officials.

“The new role includes working closely with the National Cricket Federations which is really exciting as is continuing to work with the entire cricket community in helping the development of our cricket umpires.”

Simon Taufel also thanked for the support he received during his illustrious career. “I’d particularly like to acknowledge and sincerely thank my family, all the umpires and referees that I’ve worked with, the NSWCU&SA (New South Wales Cricket Umpires and Scorers Association), Cricket Australia, the ICC staff, my coaches and friends for their support and sacrifice.

“What we have achieved together over a long period of time has been very rewarding and satisfying. It’s been a great journey, but the time is right to take a new path and I am fortunate to have been given the opportunity of assisting the next umpiring generation.

“Finally, my personal thanks and appreciation goes to all the players, coaches, scorers, support staff, media and administrators I have worked with, and who have contributed to many good moments and memories,” he added.

ICC Chief Executive David Richardson, paying tribute to Simon Taufel, said: “Simon has been one of the most respected umpires for over a decade due to his excellent decision-making and man-management skills.

“He has been a role model for umpires globally who look to him for inspiration and guidance. I am delighted that he will be working with us to groom and develop the next generation of elite umpires and have no doubt that he will be equally successful in his new role as ICC’s Umpire Performance and Training Manager.

“In the meantime I know that Simon, a thorough professional that he is, will want to focus on the job at hand, that of getting things right on the field, something he has done as well as any other umpire in the history of the game,” added Mr Richardson.

The International Cricket Council (ICC) today announced that Bruce Oxenford has been appointed to the Emirates Elite Panel of ICC Umpires from 1 November.

Oxenford has replaced Simon Taufel on the elite panel and is one of the 13 umpires on duty in the ongoing ICC World Twenty20 Sri Lanka 2012. He has been on the Emirates International Panel of ICC Umpires since 2007-2008.

Oxenford, born on 5 March 1960 in Southport, Queensland, has already umpired in eight Tests and 39 ODIs after having made his Test debut in Pallekele in a match between Sri Lanka and the West Indies in December 2010. He stood in his first ODI in 2008 in a match between India and Sri Lanka at Manuka Oval, Canberra. He has umpired 12 Twenty20 Internationals to date.

Oxenford represented Queensland in eight first-class matches from 1991-1993 as a lower-order right-hand batsman and leg break and googly bowler. In his brief eight-match career, Oxenford took 18 wickets and scored 112 runs.

Oxenford commenced his umpiring career straight after retiring from professional cricket and made his first-class umpiring debut in November 2001 by standing in a match between Queensland and New Zealand at Brisbane Cricket Ground.

ICC’s Umpire and Referee Manager, Vince Van Der Bijl, congratulated Oxenford on his appointment to the elite panel. “Bruce is a very experienced and respected umpire, and follows a long line of elite Australian umpires. He has been umpiring at the first-class level for well over a decade and is committed and dedicated to officiating.

“We are delighted to welcome Bruce, who will add his own brand of professionalism, energy and love of umpiring to the elite panel.” —- ICC