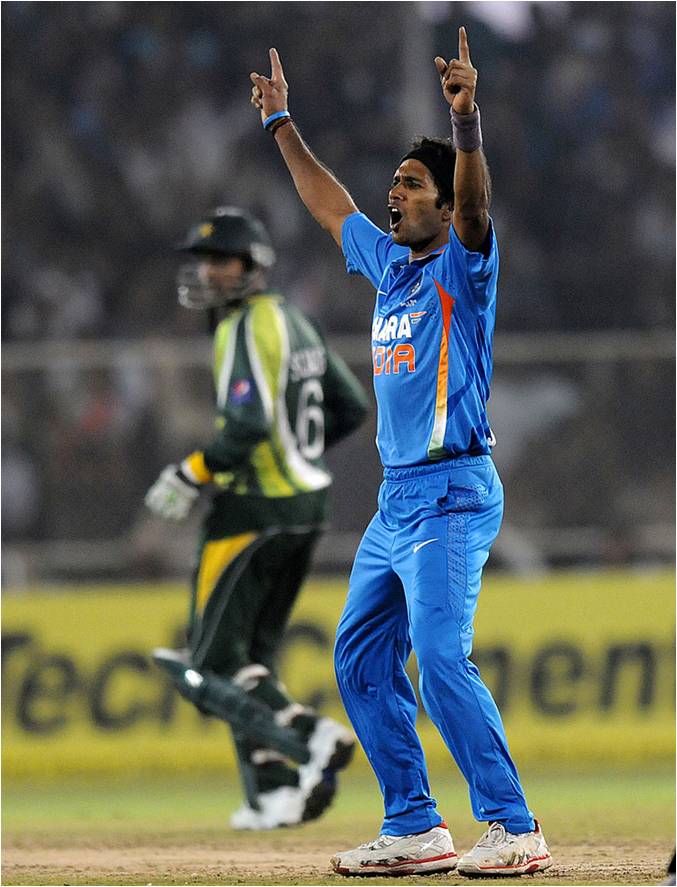 Ahmedabad – India, Dec 28: India overcame a Mohammad Hafeez masterclass to win by 11 runs and level the two-match series. His wristwork and effortless clearing of the ropes would have inspired admiration from those he tormented today. But Ashok Dinda bowled an excellent second spell at a time when Pakistan, led by Hafeez, were on track to chase down 193, a target set up by a dominating innings by Yuvraj Singh, who treated a packed house in Ahmedabad to an airshow that included seven sixes.

Dinda was at the receiving end of a last-ball six that sealed victory for England in their T20 against India less than a week ago, but he came back well despite being put under pressure early in each of his two spells. He conceded 13 in his first over, during a promising opening stand of 74 between Nasir Jamshed and Ahmed Shehzad, and was struck for two consecutive fours by Mohammad Hafeez in the 15th over that began with Pakistan needing 68 to win off 36 balls.

The conditions in Ahmedabad were pitted against the seamers, with no movement on offer and thereby forcing them to rely on variations to contain the batsmen. Dinda not only did that, he was largely accurate and picked up three wickets, including Hafeez, in a three over spell that yielded 23 when Pakistan still had wickets in hand and the target appeared within reach. A slower ball that bowled Umar Akmal ended a 62-run stand with Hafeez that had given Pakistan the edge in the chase, and Dinda got Hafeez and Kamran Akmal to hole out in the penultimate over at the start of which Pakistan required 26.

India’s spinners, R Ashwin, part-timer Suresh Raina and Yuvraj, slowed down Pakistan’s openers between overs six to 11, resulting in their wickets at the cost of just two boundaries. The required rate had climbed to more than 12 in the 12th over, when Hafeez began his charge with a scoop for four that highlighted the feature of his innings, swift but skilful and interspersed with some wonderful touch-play, but little brute force.

Hafeez deftly guided Yuvraj past point, then proceeded to dispatch Ashwin for two straight sixes over midwicket before driving and paddling Dinda for two consecutive boundaries, all in successive overs. A flat six over extra cover off Ishant Sharma showed the confidence he was playing with, but Dinda’s comeback was vital in preventing Pakistan from pushing on. Two wickets in the penultimate over brought the equation to 20 required off the last, too much for Umar Gul and Shoaib Malik against Ishant.

India’s middle order played a prominent role in the win, after having squandered an excellent foundation laid by openers Gautam Gambhir and Ajinkya Rahane in the opening encounter in Bangalore. The openers did their job again, and Yuvraj and MS Dhoni, in a stand of 97 off 44 balls, ensured their work wasn’t laid to waste.

Yuvraj , who was struck a painful blow to the toe off a Mohammad Irfan yorker early in his innings, recovered well and seemed to be in his element, striking the ball cleanly, with a lovely flourish. Afridi and Saeed Ajmal were deposited towards cow corner, and two successive short balls were pulled over the square-leg boundary. Ajmal was targeted in the penultimate over, as Yuvraj took him for three consecutive sixes, the last of them smacked over long-on.

The last five overs yielded 74 and though Dhoni played the supporting role, he wasn’t left far behind. He ran well between wickets, and pulled and drove Umar Gul for two straight fours. Though Gul picked up four wickets, accounting for India’s openers and the pair that took them towards 192, he was short of support from the rest of his attack and bowled a no-ball in the final over that yielded a boundary off the free-hit. Tanvir, Ajmal and Afridi each went for over 10 an over, leaving their batsmen too much to compensate for. —- By Siddhartha Talya/Image © BCCI