The Olympics Sports team Abdul Rahim and Muhammad Sadiq Padela, Gold Coast, Australia, By Hope Kerslake, April 14, 2018: Australia’s Skye Nicolson did the one thing her late brother never had the chance to, win gold at a Commonwealth Games. 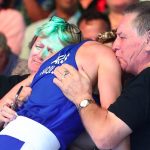 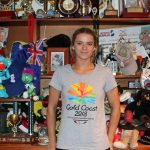 Jamie Nicolson was a star in the ring during his career, becoming the first Australian to win a medal at a world championship in Moscow in 1989.

Competing in the same division as his sister, the 57kg fighter also won bronze at the Auckland 1990 Commonwealth Games.

Tragically, both Jamie and younger brother Gavin were killed in a car accident on their way to boxing training in Nerang in 1994, a year before Skye was born.

He’s the brother she never knew Jamie has played a major part in her life, with many even believing he lives through her – the pair also share a right hook which Jamie was famous for.

“I have no words. I’m so excited right now, over the moon. The best feeling I’ve ever felt in my life,” Nicolson said after her gold medal bout.

Nicolson went into the final knowing it would be a tough fight, however the Albert Boxing Club member had something Walsh didn’t, two angels in her corner.

“Yeah, 100 per cent. I had a little chat to them right before I went in and they were with me,” Nicolson said on whether she felt her brothers were with her.

“I always knew it was going to be a tough fight and a chess match.

“I always hoped I would meet her in the final. We were both wanting to draw each other in.

“I just took the chance and be the one that went forward. She’s a great boxer.”

The 22-year-old started her boxing career a decade ago and has fought tooth-and-nail for the last 10 years to win gold for her country in a major sporting competition.

It has been a rocky road for the pint-sized fighter, who missed out on a spot in the Rio Australian team after she lost a 60kg final to Glasgow 2014 gold medal winner Shelley Watts, in a somewhat controversial decision.

Despite the pain of missing out, Nicolson re-focused on her next goal, to win Australia’s first elite women’s world titles medal and the Commonwealth Games on the Gold Coast.

Claiming a world championship bronze medal in 2016 and now a Commonwealth gold, Nicolson has achieved everything she has set her mind to.

So, what’s next for the Yatala resident?

With a wall of the Nicolson family home covered with Jamie’s trophies, medals, newspaper clippings, awards and posters, we’re sure to see Skye’s memorabilia start stack up against her late brother’s. —- GC2018