In his final race in the green and gold, Fearnley, 37, opened up a gap on the field at five kilometres and by halfway held a lead in excess of 40 seconds.

The two-time Paralympic marathon champion relentlessly forged ahead for the remainder of the race in a Commonwealth Games record time of 1:30:26. It was his second medal of GC2018 following silver in the T54 men’s 1500m on Tuesday.

“Everybody deserves nothing, if you want it, you have to work for it,” Fearnley said.

“I was lucky I got a bit of a break at the four kilometre mark, but that’s not to say I wasn’t working. I had a look and my average heart rate was 194bpm (beats per minute), which includes a minute before the race started, so I was constantly working.

“You’ve got to be fierce and that was as fierce as I’ve ever been.

“You’ve got to turn out, come out and fight for it. I’ll fight harder than any of my opposition when it’s one of these days.

“Eight years ago I knew that this was going to be my last race for Australia and that has never wavered, even last night lying in my bed.”

In a close battle for the minor medals, England’s John Smith edged out his compatriot Simon Lawsom for silver in 1:31:44. Tristan Smyth was credited with the same time in fourth.

Australia’s Madison De Rozario claimed her second gold medal of the Commonwealth Games courtesy of a late breakaway in the women’s T54 marathon. 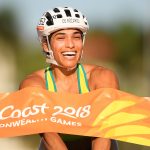 Following her win in the T54 1500m on Tuesday, De Rozario broke clear of a group of four athletes in the final five kilometres to grab gold in 1:44:00. Australia also claimed silver via Eliza Ault-Connell in 1:44:13.

It’s an amazing feeling. I didn’t know what was going to happen,” De Rozario said.

“This is my first Commonwealth Games and to do it in front of a home crowd is incredible – they were amazing.

England’s Jade Jones the Para women’s triathlon gold medallist, earned her second medal of the GC2018 with bronze in 1:44:20.