The Olympics Sports team Abdul Rahim and Muhammad Sadiq Padela, Gold Coast, Australia: By Bill Beaumont CBE, Chairman of World Rugby, April 13, 2018: The Commonwealth Games continues to play a very special role in the global Rugby Sevens success story and we are excited at the prospect of what will be a landmark Gold Coast Games for our sport (Modern Commonwealth Rugby Sevens). 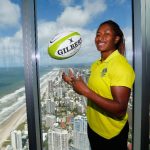 Since our debut in 1998, the Games and Rugby Sevens has enjoyed a special relationship, delivering unforgettable moments on and off the field for players and fans alike. Indeed, the Games played an instrumental role in our return to the Olympic Games stage at Rio 2016.

The Gold Coast 2018 Rugby Sevens will be of extra importance and excitement. Not just because we look forward to three sell-out days of high-octane, world class sevens, but because Women’s Sevens will make its long-overdue debut.

We are delighted that we have all three medallists from Rio – Australia, New Zealand and Canada – here to showcase the skill and speed of one of the world’s fastest-growing team sports.

In the men’s competition, we are anticipating one of the most competitive events in Commonwealth Games sevens history.

It promises to be a thrilling competition with the 16 teams, including debutants Zambia and Jamaica, competing across four pools.

This has been driven by our rapidly expanding emerging markets and supported by a passionate, engaged and ever-increasing fan-base that topped a record-breaking 338 million in 2017 as we increasingly reach and inspire a new, younger generation of fans.

The Commonwealth is itself entering an era of renewed attention and significance on the global stage, and so this is a perfect time for World Rugby and the CGF to strengthen its relationship as we look forward to three sensational days of Rugby Sevens in South-East Queensland.

For Rugby Sevens, we continue to break new markets. Our Rugby World Cup Sevens 2018 will be hosted in San Francisco this July and certainly will be an event not to be missed for any sevens fan.

But returning to this event, the debut women’s tournament reflects our mission to further the development of women’s rugby and women in rugby.

Last November, World Rugby launched our landmark strategic 2017-2025 Women’s Plan aimed at accelerating the development of women in rugby at all levels of the sport and inspiring future generations of young people around the world.

Gender parity is something that I know is especially close to the heart of the Commonwealth Sports Movement, given the equal men’s and women’s medal opportunities, 50% female technical officials in rugby, and Women’s Coaching Internship Programme here on the Gold Coast.

At the same time, to bring greater gender-balance to the highest levels of our governance, the World Rugby Council took the ground-breaking step of increasing the number of people who may sit on Council from 32 to 49, with the 17 new representatives to be women, meaning the percentage of women who will sit on our highest decision-making body will be 35%.

An important reform that is right for our sport, right for our governance and one that I firmly believe will have a significant and positive impact on the future development of the game of rugby as a whole.

I know the top Sevens players from across the Commonwealth can’t wait for the action to start and to showcase their incredible talent in what will be a very special, festival atmosphere.

We are all looking forward to writing another successful chapter in this remarkable Rugby Sevens success story here on the Gold Coast.

I wish all the rugby teams – the entire Team Commonwealth – the very best of luck over the next three days. —- CGF