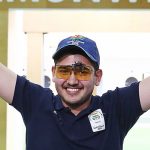 A 15-year-old with one name has become the youngest Indian to win Commonwealth Games gold.

Anish shot into history when he spun his magic in the men’s 25m rapid fire pistol at the Belmont Shooting Centre on Friday 13 April.

The teenager, who is the world 25m standard pistol junior champion and record holder, headed off local hope Sergei Evglevski before the Australian could fire his last five shots.

Anish, the top qualifier with 580 and 22 central bulls, started with two possible fives, racing to a three-point margin.

He stumbled with a three and a one before scoring another five to lead by four points over Evglevski.

“I’m very excited that I became the Commonwealth champion,” he said.

“I am the youngest athlete from India to win Commonwealth gold at 15.”

England’s Sam Gowin, who took up the sport just a year ago, survived two shoot-offs, firstly eliminating India’s Neeraj Kumar and then reigning champion and Australian David Chapaman to make the top three.

Evglevski assured himself of silver with a perfect round as Anish managed a three (22-20).

Anish scored three and Evglevski four as Gowin dipped out with bronze.

In the gold-medal round, with just a one-point margin, Anish, who won the silver at the Commonwealth Shooting Championships in November 2017 at the same venue, displayed his skill and promise with a magical maximum of an unbeatable 30 points.

Anish will next head to the world championships in South Korea and the Asian Games in India, but for tonight, he’ll take a break.