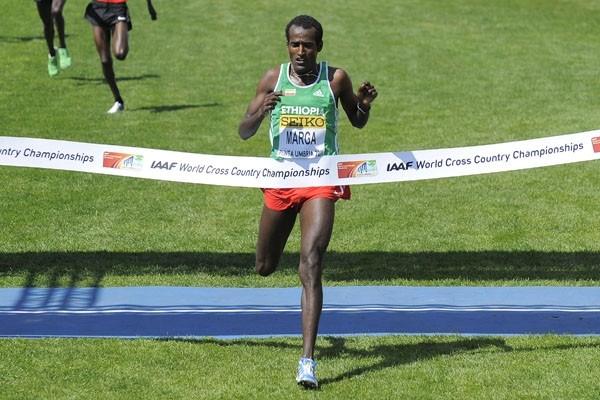 Monaco – Mar 14, 2013: Ethiopia’s defending senior men’s champion Imane Merga can hardly wait to stand on the start line at the 2013 IAAF World Cross Country Championships, which will be held in the Polish city of Bydgoszcz on Sunday 24 March.

“Training has been going very well. I feel very strong, very confident and I’m very motivated to do my best to defend the title I won in Punta Umbria two years ago,” said Merga.

“Last summer was a disappointment. I had some slight injuries in July and lost my chance to go to the Olympics, but since November I have been steadily improving,” added the 24-year-old runner.

He won at the high-quality IAAF Cross Country Permit meeting in Atapuerca, near Burgos, in Spain last November and then took the honours at the famous Boclassic road race in Bolzano, Italy, on New Year’s Eve.

However, he dropped out of the Ethiopian trials for Bydgoszcz last month, which caused some concerns for his fitness.

“There is no need to worry. I had been training really hard in February and even did a tough session the day before the race. I just felt tired,” revealed Merga.

On the women’s side, 2011 senior gold medallist Vivian Cheruiyot is not in the Kenyan team this time but there is a World Cross Country champion of a very slightly earlier who will be looking to regain her title, Emily Chebet.

Chebet won in Bydgoszcz’s Myslecinek Park, on almost the same course, in 2010 and has returned to form this winter with a series of good performances in domestic races.

Kenya’s Faith Chepngetich Kipyegon was just 17 when she won the junior women’s title in 2011 and so, although the IAAF World Cross Country Championships has now become a biennial event, she is still young enough to defend her title.

Kipyegon, who won the 1500m at the IAAF World Junior Championships last summer, is aiming to become just the third teenager to defend her crown, a feat that will inevitably become harder now that the Championships are every two years. —- IAAF