Dublin, June 27, 2017: Members of the media wishing to attend Women’s Rugby World Cup 2017 in Ireland have until Friday, 30 June to apply for accreditation to the event (WRWC 2017 media accreditation to close this week). 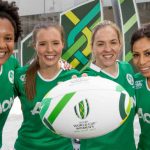 The competition, which runs from 9-26 August in Dublin and Belfast, will see the pool stages played at UCD Bowl and Billings Park, Dublin, on 9, 13 and 17 August with the semi-finals and finals played in Kingspan Stadium and Queen’s University, Belfast, on 22 and 26 August.

Accredited media will be given a tournament pass to enable them to cover all venues over the five match days, however journalists and photographers will be asked to advise the Irish Rugby Football Union (IRFU) communications team on which fixtures they intend to cover, once accreditation has been confirmed.

Media who are not already registered on the IRFU accreditation platform will be required to do so. Those who have already applied will be contacted in due course.

The official Women’s Rugby World Cup 2017 media launch, featuring team captains, World Rugby and IRFU representatives and ambassadors will take place on Sunday, 6 August, 2017 in Dublin. The time and location will be announced in due course.