Zurich, Sept 13, 2019: Following the decision taken by the Bureau of the FIFA Council to appoint a normalisation committee for the Pakistan Football Federation (PFF) and the subsequent consultation and interview process undertaken by FIFA and the AFC, the composition of this committee can now be confirmed as follows: Humza Khan
Read More 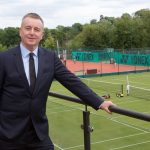 By Amelia Fisher-Starzynski, September 12, 2019: Dave Miley, who is standing to become the next President of the International Tennis Federation [ITF], has today launched the first of a series of short online campaign Commitment online film series. The first film entitles ‘Leading a movement of like-minded people to positively change Tennis’
Read More
Bahrain, September 12, 2019: BRAVE Combat Federation will come back to beautiful Abu Dhabi for the third time in as many years, and the fastest-growing promotion in the world has released the full card for BRAVE CF 27, which takes place on October 4th at the Mubadala Arena. The fight card sets
Read More
Miyazaki, Japan, September 11, 2019: Team Australia displayed the well-balanced attack of their men and women surfers on Wednesday and took the ISA Aloha Cup Gold Medal at the 2019 ISA World Surfing Games presented by Vans in Miyazaki, Japan (Aussies Claim Gold Medals). Ryan Callinan’s 7.33 wave score led Australia in
Read More
Bahrain, September 10, 2019: BRAVE Combat Federation has announced its return to BRAVE CF Abu Dhabi for October 4th, when the most anticipated rematch in Arab MMA history will take place, as former Welterweight champion Jarrah Al-Selawe gets an immediate shot at reigning titleholder Abdoul Abdouraguimov. The duo fought for the first
Read More
Monaco, September 09, 2019: Athletics fans around the globe will be closer to the action than ever before as IAAF Productions introduces ground-breaking Trailblazing technology to the broadcast of the IAAF World Athletics Championships Doha 2019, starting on 27 September. The IAAF, with technology partners and suppliers, has made a concerted push
Read More
Montreal, September 08, 2019: Sakiai Gulbele win (LTU) made history in the first edition of the FIBA 3×3 World Tour Montreal Masters on September 7-8, 2019. The Lithuanian squad took home their first-ever World Tour Masters title after beating the World Tour reigning champs Novi Sad (SRB) in the semi-finals and crowd
Read More
Abu Dhabi, Sept 7, 2019: No fighter gets to 28-0 without being one of the best in the world, but after a third round submission win over Dustin Poirier in the main event of UFC 242, undisputed UFC lightweight champion Khabib Nurmagomedov may have to be included in the all-time great conversation.
Read More
Bogota, Colombia, Sept 7, 2019: Newcomer Felipe Silva didn’t waste any time in his BRAVE Combat Federation debut, as he rolled through Dumar Roa in the main event of BRAVE 26, held this Saturday, in Bogota, Colombia (Felipe Silva reigns supreme). In front of a sold-out and passionate Colombian crowd, he showcased
Read More
By PCB, Lahore, September 6, 2019: The Pakistan Cricket Board (PCB) has expressed its shock and grief at the news of legendary leg spinner Abdul Qadir passing and has sent a message of condolence to his family. PCB Chairman Ehsan Mani said: “We devastate with the news of Abdul Qadir’s passing and
Read More