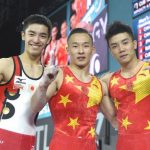 Xiao, 21, succeeds Japan’s Kohei Uchimura, who has reigned over the men’s All-around competition since 2009 but was forced to cede his throne after injuring himself in Monday’s qualifications. That permitted China to return to the forefront of the world stage following an Olympic Games where the country’s gymnasts did not capture a single individual medal.

A thriller down to the last routine
The race to occupy Uchimura’s place fulfilled all promises of suspense. Two thirds of the way through, a tenth of a point separated the top three: Xiao, Russia’s David Belyavskiy and Shirai. With an impeccable exercise on Parallel Bars, Belyavskiy began to pull away from the field, and as he mounted the High Bar to begin his final routine, seemed to be driving toward his first major title.

But his fall on a not terribly difficult element ruined his chances of taking gold. Afterward, Belyavskiy had reason to cradle his head in his hands: as at the Rio Olympic Games, he ended fourth, having missed the podium by a few hundredths of a point.

The return of China
Since the retirement of Beijing Olympic All-around gold medallist Yang Wei, China has waited 10 years for another individual champion. In Xiao Ruoteng and Lin Chaopan, they’ve found two new stars. Steady over the course of six events in his second Worlds, Xiao turned in a masterful performance for the World title.

Lin Chaopan knows what it’s like to stand atop an individual World podium: four years ago, the pillar of the Chinese team took a gold on Parallel Bars. With silver behind Xiao, Lin showed he is more than just a specialist.

Shirai, another master from Japan
At only 21 years old, Kenzo Shirai already owns three World titles, two of them coming on Floor Exercise, but never before had he won a major All-around medal. In Montreal, he relied on his best events to lift him to bronze, affirming himself as a serious candidate for the supreme title on the road to the Tokyo 2020 Olympics.

A bad day for Oleg Verniaiev
After coming within 0.099 of knocking Uchimura off his pedestal in Rio, Olympic silver medallist Oleg Verniaiev was expected to contend for the title, but was well off his Olympic form. After a slow start on Floor Exercise, Verniaiev saw his chances of finishing first begin to evaporate when he fell off the Pommel Horse. He even lost his balance on Parallel Bars, his best event, and fell again on the Horizontal Bar, knocking him down to eighth place.

First in qualifications, Cuba’s Manrique Larduet was one of the other big favorites, but the 2016 World All-around silver medallist missed the podium by four tenths of a point, finishing fifth overall. —- FIG