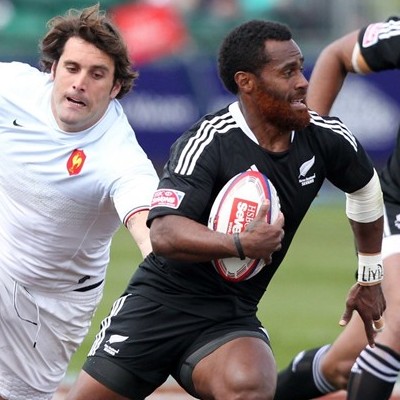 Dublin, May 04, 2012: The battle is on to be crowned HSBC Sevens World Series champions and just six points separate the top two sides. Reigning Series champions New Zealand sit at the top of the table on 128 points after the first seven rounds of the season, with perennial rivals Fiji on 122 ahead of the Emirates Airline Glasgow Sevens.

While New Zealand have once again been the most consistent side across the entire season, the Fijians’ return to their flamboyant style of yesteryear has brought the fans to the edge of their seats, and even to their feet.

Who will be crowned champion in London on 13 May? We take a closer look at these two magnificent Sevens teams.

New Zealand: Gordon Tietjens is peerless in the Sevens world, having been at the helm of New Zealand since 1994 and the only one to arrive in Glasgow having coached his side in all 107 World Series tournaments to date. Nine Series titles out of 12 so far, four Commonwealth Games gold medals and proud to have seen 37 All Blacks pass through his regime. With a new contract until 2016, more players will pass through Tietjens’ legendary training sessions. His focus on fitness and conditioning was tapped into by Graham Henry in 2011 as the All Blacks coach sought to find that extra something to win the Rugby World Cup.

Fiji: Alifereti Dere is a former Fiji Sevens captain and, together with his assistant Etuate Waqa, has taken over the reins of the team this season. Dere and Waqa have brought back the style of attacking from everywhere that people have always associated with Fiji, abandoning the more structured approach of his predecessor Jo Savou. Success has come in Australia and Hong Kong, leaving Fiji only six points behind New Zealand and in contention for a second World Series crown.

New Zealand: DJ Forbes will play his 50th IRB Sevens event in Glasgow this weekend and is the pillar on which Tietjens builds his team, the player who creates the squad’s ethos and winning mentality. A former IRB Sevens Player of the Year, Forbes has been in outstanding form this season, leading from the front. Easy to spot with his shaven head and bushy beard, even more so with its unusual colour this weekend.

Fiji: His counterpart Setefano Cakau has been a stalwart of the Fijian team for a while now and is an outstanding leader, ball winner and finisher. His form belies his age as he approaches his mid-30s and he was the inspiration behind Fiji’s success on the Gold Coast in round one. He has recovered from injury to recapture that kind of form and Fiji will need him firing if they are to deny New Zealand a 10th World Series crown.

New Zealand: It would be hard to look beyond Tomasi Cama, New Zealand’s playmaker, the master, a genius and brilliant orchestrator of attack who punches above his weight in defence. That said, it would be remiss not to also mention try-scoring machine Frank Halai and Tim Mikkelson. Halai was on fire earlier in the season, scoring the winning tries in South Africa and Wellington, and has 27 tries to his name despite missing the last two events through injury. Mikkelson is Mr Consistent and his rangy runs often create something out of nothing and relieve pressure.

Fiji: Cakau is undoubtedly a key man for the Fijians, but Joeli Lutumailagi and Waisea Nayacalevu are equally strong going forward and crucial to their side’s plan of attacking with reckless abandon. They are quick, sparky and unpredictable with Lutumailagi having crossed the line 19 times this season, four times more than Nayacalevu.

A rivalry to savour

Forbes on Fiji: “Well, I think in terms of the game of Sevens they are probably the most naturally gifted Sevens players in the world. Their forwards and their backs can step, they are both fast and I guess they are born and breed to play Sevens. To see their creativity on the field, they love their broken play so I guess when you are defending that kind of stuff it is quite intimidating to know if there is a break in play that is what they thrive on. For us, just seeing their natural flair is quite an exciting element.

Forbes on the key man for Fiji: “They have got a number of little playmakers who step in to run the show but I think in terms of the team I probably wouldn’t be able to pinpoint one, but their forwards over the last couple of years have been a lot fitter than they normally are. I guess that was probably a weakness back in the day when they would rely on the playmakers to run the cover, but now you can see a lot of big boys doing a lot of the hard yards and getting their backs into it. I probably wouldn’t want to pinpoint anyone but their forwards have definitely stepped up over the last couple of years.”

Cakau on New Zealand’s key man: “I know they have Tomasi (Cama) there. He is a good playmaker, he sets off the rest of the players … maybe all of them are key but Tomasi, he is the mastermind in their team. He is a good player.”