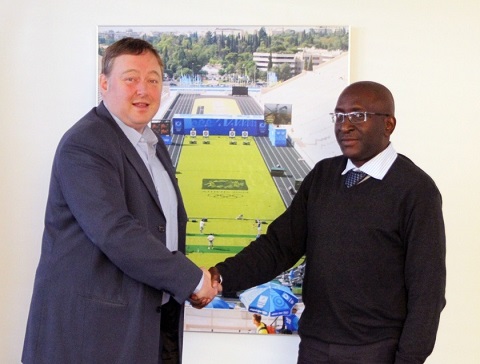 Lausanne (SUI), April 16, 2013: World Archery (WA) has signed a partnership agreement with OlympAfrica for the development of archery in Africa, especially for the youth.

In collaboration with the National Olympic Committees of each of these countries, OlympAfrica has set up centres dedicated to sports activities, workshops, HIV prevention, coach education and much more. The aim of these centres is to involve the youth in sports and activities that are good for their future development once they have finished their day at school. It’s an excellent talent identification initiative, particularly with the introduction of the Youth Olympic Games in the Olympic Programme.

World Archery Secretary General Tom DIELEN, the Director of the WA Development Department Pascal COLMAIRE and Development Coordinator Deqa NIAMKEY, met with the Director of OlympAfrica, Thierno DIACK, at the WA headquarters in Lausanne to finalise and sign the partnership agreement. It was agreed that a pilot project will be introduced in Niger for 2013, followed by other countries in agreement with the WA Member Associations.

World Archery is delighted of this new collaboration with such an important foundation for the development of sports in Africa. —- WA