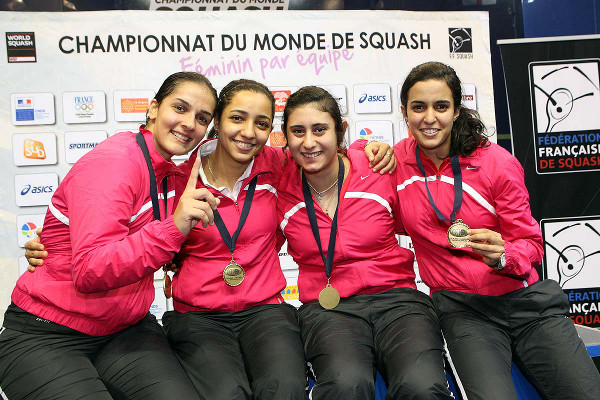 Nimes – France, Nov 21: Unexpected success in the WSF Women’s World Team Championship in Nimes sees Egypt hold the men’s and women’s senior and junior world team squash titles simultaneously for the first time – highlighting the country’s potential to win its first Olympic gold medal since 2004 if Squash were in the Games programme.

After a semi-final line-up featuring nations from four different continents, second seeds Egypt emerged triumphant after beating favourites England in a dramatic final which went to the wire. Held in France for the first time and boasting a record entry of 26 nations, the 2012 World Squash Federation championship came to a climax at the historic city’s La Parnasse Arena where, for the first time ever, action took place simultaneously on three all-glass show courts.

Egyptian coach Amir Wagih was thrilled with his team’s performance: “It’s so good for Egypt and so good for squash – it was a super final with three matches of unbelievable squash.”

Egypt’s latest success follows the men’s team crown won in Germany last year; the men’s junior team title successfully retained in July this year; and the women’s junior trophy which the country has held since 2007.

Squash is one of seven sports short-listed for consideration for the 2020 Olympic Games. With a solitary bronze won in the 2008 Games in Beijing, and just two silvers at London 2012, Egypt would be confident of adding squash gold in 2020 and beyond.

“Before getting underway, our women’s world championship in Nimes already broke significant records – with a record 26 entries and the first ever simultaneous use of three all-glass showcourts at the same event,” said WSF President N Ramachandran.

“And now Egypt’s inspiring team of young women has emphatically shown that a new nation could feature regularly on the winner’s podium if our sport were part of the Olympic Games programme.”

“The event provided a great opportunity for squash development in France,” said Jacques Fontaine, President of the Fédération Française de Squash, which will also host the 2013 Men’s World Team Championship in Mulhouse next June.

“All our efforts were focussed on our 2020 bid – the event helped to showcase the global growth of squash with a record number of nations taking part.

“We now feel we can expect a huge success in Mulhouse next year, where we will also be using the three glass courts.

“We were delighted to host this year’s women’s world championship for the first time. It confirms to us that world-class squash events offer the best opportunity to promote our sport,” concluded Fontaine.