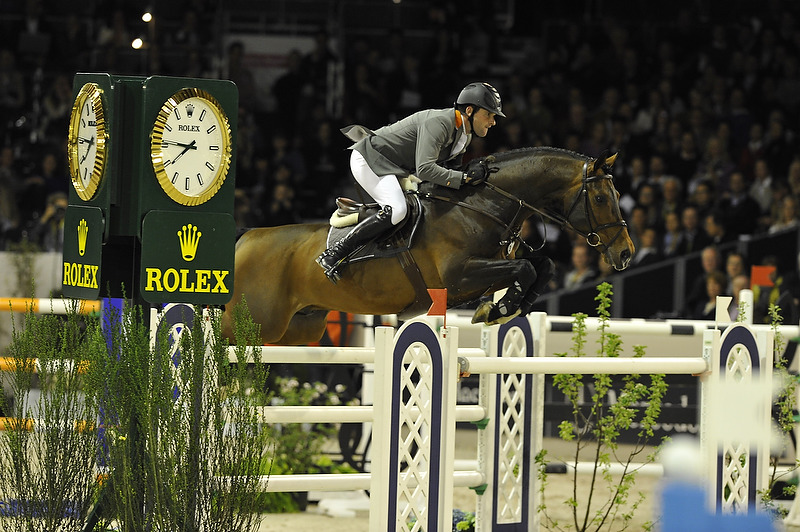 Germany’s Philipp Weishaupt won tonight’s second leg of the Rolex FEI World Cup™ Jumping Final at ‘s-Hertogenbosch (NED) in a thrilling three-way jump-off against the clock. But it is runner-up, Switzerland’s Pius Schwizer, who holds the advantage going into Sunday’s final competition which will decide the fate of the 2011/2012 title.

As the going got tough this evening, the cream rose to the top, and clear rounds proved very elusive indeed. Weishaupt’s fellow-countryman, Marco Kutscher, was the only other starter to find the key to the course set by Louis Konickx, but reigning Olympic champion, Canada’s Eric Lamaze, was unlucky to miss out on the final barrage when stopping the clock just 500ths of a second off the pace for a single first-round time penalty to finish fourth and is in serious contention going into the closing stages.

Another masterpiece from Konickx not only tested rider’s judgement and nerve, but the pure scope of the horses tonight. The course was relentless from start to finish, with the double of big oxers at four, the vertical with water-tray at five, and the dog-leg line to fence 10 all taking their toll. Once again the Dutchman gave them plenty to look at and think about, with another unusual wall, narrow and shaped like an inverted triangle, at fence nine, but it was the triple combination at fence 11 that proved the real bogey of the class. Riding off a left-hand turn, riders needed plenty of momentum coming down to the opening vertical in order to make the two-stride distance to the following oxer of white poles and, time and again, this hit the floor as horses struggled to reach the back bar. Second-placed Kutscher explained the challenge at this fence which fell for 17 different riders tonight – more than half of those on the start-list.

“It was the colour of the poles, but also the fence was absolutely square and very wide – 1.70m I think – and then it was short to the vertical going out. White poles are always more difficult to jump than poles with colours,” he pointed out.

This fence claimed yesterday’s Speed class-winners, America’s Rich Fellers and Flexible, and other leading contenders including Belgium’s Rik Hemeryck with Quarco de Kerambars and Frenchman Kevin Staut with Silvana HDC amongst its long list of victims. But Eric Lamaze kept a clean sheet only to find he had just exceeded the time allowed with Coriana van Klapscheut.

Kutscher was first to return a zero score when 11th to go with Cornet Obolensky who breezed home effortlessly. And another nine horses took their turn before Weishaupt and Monte Bellini joined their German colleagues with a clean sheet. The performance from Kutscher’s 13-year-old stallion looked very classy indeed, but Monte Bellini produced an even smoother round that included a fabulous run through the testing triple combination. Schwizer’s fault-free effort with the 11-year-old mare, Carlina, was super-cool, and he had the benefit of being last to go against the clock.

It was Kutscher who set the target with another spectacular clear in 35.03 seconds. “I tried to put pressure on my colleagues, but it wasn’t enough!” he said afterwards. Weishaupt was next off, and effortlessly broke the beam with almost two seconds of an advantage. “Marco was really fast already so I decided to go as smooth as I could and to get good turns and put pressure on Pius,” he explained. And that’s exactly what he did as the clock stopped at 33.04 seconds to put him well in the lead.

Last in, Schwizer gave it his best shot when galloping home in 33.56 with Carlina. But he said afterwards he was being cautious. “I wanted to stay calm – my plan was to stay clear and not to upset things before Sunday,” he explained. So Weishaupt had it in the bag, and there was a particular satisfaction for him as he explained later. “Last year in four or five Grand Prix classes I only had Pius behind me and he beat me every time – so I’m happy it didn’t happen this time!” he said.

But it is Schwizer who goes into Sunday’s finale on a zero score, although Switzerland’s Steve Guerdat is hot on his heels just one point behind after finishing sixth with Nino des Buissonnets – one of 10 horses to have just one fence down in today’s first round. And yesterday’s speed-class winners, America’s Rich Fellers and Flexible, are also just a single point adrift, while Staut carries three points and another three riders carry four penalties into the decider. And this bunch are no shrinking violets – Canada’s Lamaze (Coriana van Klapscheut), Weishaupt (Monte Bellini) and Belgium’s Rik Hemeryck (Quarco de Kerembars), while the USA’s Beezie Madden (Cortes C) is stalking them, carrying seven penalty points.

Kutscher, who yesterday competed with Satisfaction, pointed out that the only three riders to go clear today were all riding different horses to the ones they competed in yesterday’s opening speed leg, and he was delighted with his stallion’s result today.

“Cornet is not the fastest horse but maybe I should have risked more today…I’m in third now (in today’s class) and if I finish like this again on Sunday then I should finish in the first five,” he said.

Tonight’s winner Weishaupt meanwhile was looking ahead. “I’m very proud of him (Monte Bellini) tonight, and I hope I’m staying in this form with him on Sunday – and over the next few months!” he said. Schwizer needs to be more than careful if he is to maintain his slim advantage and take the Rolex crown in two days’ time…..

The last challenge of the 2011/2012 Rolex FEI World Cup™ Jumping Final begins at 14.00 local time on Sunday next. Don’t miss a hoofbeat – watch it all LIVE on FEI TV! www.feitv.org