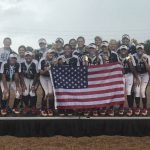 The 2017 edition matched the previous championship in Oklahoma City with No. 2 USA moving directly to the Gold Medal game, while No. 1 Japan had to defeat No. 7 Puerto Rico in the Bronze Medal Game to advance.

Rain threatened throughout Championship Sunday. But the weather held off just long enough to crown a World Champion.

United States got on the board in a hurry as Hannah Adams walked and Nicole Bates singled. Madilyn Nickles then hit an absolute bomb, bouncing off the outfield lights for a three run lead.

But Japan did not let that bother them tying the game up in the bottom of the inning. Urara Fujimoto led off singling on a hard ground ball back to pitcher Holly Azevedo. Azumi Shimomura followed, hitting back to Azevedo — who could not field the ball cleanly — to have runners on 1st and 2nd.

With one out, Eri Shimoyama then doubled to left field to score Fujimoto and Shimomura. Hiroyo Hattori continued the hitting spree with a ground ball to first baseman Jessie Harper, who bobbled the ball allowing Shimoyama to cross home for a 3-3 game.

In the second, USA retook the lead when Alissa Dalton lead off with a single to left followed by a hard ground ball to short by Elissa Brown.

But base-running errors cost USA as Dalton took too large of a lead off second and got caught in a run-down while Brown was caught leaving first early to end the half inning.

Japan pulled ahead in the bottom half as Miyu Miyamoto singled and Fujimoto walked. A ground ball to center field by Reina Matsumoto drove in Miyamoto but Adams fired a bullet to home to catch Fujimoto to end the inning with Japan up 4-3.

In the top of the 5th, USA again went ahead but for good as the wind carried Baylee Klingler’s high fly ball over the right center fence for a two-run homer and the one run advantage.

Following two singles, Dalton blasted a curving ball over the right field fence to bring the game to 8-4.

In the 6th, USA added to their total as Nickles doubled on a fly ball to center scoring Adams and Bates to extend their lead to 10-4.

In the 7th, Japan got into further trouble as they loaded the bases on a single and two hit batsman with only one out.

A diving play by Matsomoto kept the ball in the infield but she could not put anything behind the throw home allowing Dalton to score.

A line drive hit through the infield then pushed Brown home, followed by another single to right to score Adams for a 13-4 ball game giving USA the gold medal.

ROAD TO THE FINALS

USA (6-0) finished atop Pool A to qualify into the Championship Round. In the playoffs, they defeated Puerto Rico 8-3 to advance to the semi-final against Japan.

Japan (6-0) finished atop Pool B to qualify into the Championship Round. In the playoffs, they defeated Canada 8-7 to advance to the semi-final game against USA.

In the first semi-final game, USA defeated Japan 4-1 to advance to the gold medal game. Japan’s loss pushed them into the bronze medal game.

The 7-2 loss gave Puerto Rico the bronze, which is the same finish from the 2015 Junior Women’s Softball World Championship.

The 12th Jr. Women’s Softball World Championship in Clearwater has brought together a record-high 26 national teams from all five regions, as seven nations are making their junior women’s world championship debuts.