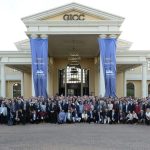 Italy’s Riccardo Fraccari ran unopposed to win the seat as the Chairman of the WBSC Baseball Division, while Puerto Rico’s Tommy Velazquez was elected as the new Chairman of WBSC Softball Division. Fraccari is also the current president of the World Baseball Softball Confederation.

“At the next WBSC Baseball Executive meeting in Paris next March, we will outline our strategic plan covering the next four years,” said Fraccari, “laying out the important roadwork needed to build a billion-strong baseball/softball community and secure a long-term place on the Olympic Programme.”