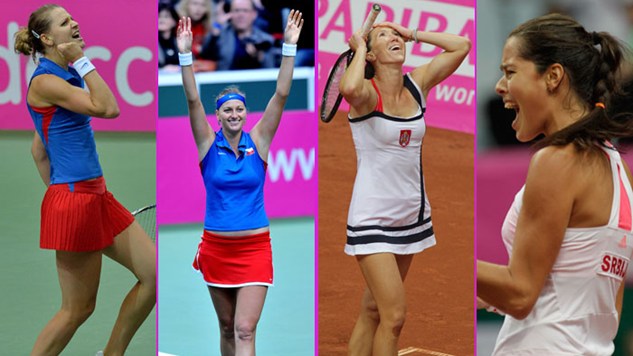 London – GBR, Oct 08, 2012: The ITF today announced that Petra Kvitova (CZE), Lucie Safarova (CZE), Ana Ivanovic (SRB) and Jelena Jankovic (SRB) have been shortlisted for the last Fed Cup by BNP Paribas Heart Award of 2012. All four players competed in the World Group semifinals in April and helped their nation reach the Final, which will see Czech Republic defend its title against Serbia at the O2 Arena in Prague on 3-4 November.

The players were shortlisted by the Heart Award judging panel, consisting of ITF President Francesco Ricci Bitti and a mixture of former players and members of the international media. A public vote, running on 8-26 October, is being held on FedCup.com and FedCup.com/es to decide the winner, who will receive a cheque for $10,000 to be donated to her chosen charity. The winner will be announced in Prague during the lead-up to the Final.

The Fed Cup by BNP Paribas Heart Award is a joint initiative between BNP Paribas and the ITF. It aims to recognise players who have represented their country with distinction, shown exceptional courage on court and demonstrated outstanding commitment to their team. A total of five Heart Awards are being presented in 2012. Earlier in the year, Daniela Hantuchova (SVK), Sofia Arvidsson (SWE), Catalina Castano (COL) and Li Na (CHN) were all recognised.

Kvitova and Jankovic are both bidding to become the first player to win two Heart Awards, having received the honour in 2011 and 2010 respectively.

ITF President Francesco Ricci Bitti said: “All four players have shown great commitment to their countries in recent years, and deserve their place in the 2012 Fed Cup Final. Their passion and dedication embodies the spirit of the competition, and I would like to congratulate all of them for being nominated for this Fed Cup by BNP Paribas Heart Award.”

To cast your vote, visit the Fed Cup website: http://www.fedcup.com/en/home.aspx.

The Czech No. 1 underlined her reputation as the indoor queen with another sterling performance to help her country reach back-to-back finals. The big-hitting Kvitova took out Sara Errani and Francesca Schiavone to continue her 10-match winning streak in Fed Cup.

Safarova caused arguably the biggest upset of the 2012 Fed Cup by BNP Paribas semifinals when she stunned Francesca Schiavone on the first day to set up her teammate, Kvitova, to ensure her team’s place in next month’s showpiece.

The elegant Serbian is a former world No. 1 and during April’s semifinal against Russia the 24-year-old was back to her very best. Ivanovic rebounded from an opening day loss to Svetlana Kuznetsova by admirably contending with the pressure of a passionate Russian crowd to overcome Anastasia Pavlyuchenkova 36 60 63 in the first of the reverse singles rubbers on Saturday.

Jankovic was instrumental in sealing Serbia’s place in its first Fed Cup by BNP Paribas Final. The former world No. 1, who holds the record for the most Fed Cup singles victories for Serbia, won both her singles matches against Russia, including the decisive third point against Svetlana Kuznetsova.

To be presented at the final World Group semifinals