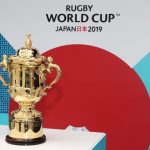 Phenomenal interest from Rugby fans both in Japan, and abroad has seen over 2.5 million ticket applications to date since priority applications began in January 2018.

With tournament organisers Japan Rugby 2019 targeting a total of 1.8 million ticket sales, demand across the tournament, particularly among the top-ranked teams pool matches and finals series, has been exceptionally strong.

“The response from both Japanese and international rugby fans has been truly amazing.

“However, my message to those fans who have not yet been successful is to apply again in September 2018 when the next ballot phase opens. There are still plenty of great tickets available and we want to ensure that we welcome as many fans as possible to this once in a lifetime tournament.”

Rugby World Cup 2019 will be the first time the tournament will be held in Asia and the first to be hosted outside of the traditional rugby powerhouse nations.

Every four years rugby fans the world over look forward with great anticipation to the staging of Rugby World Cup. Japan, with its unique culture, world famous hospitality, bustling urban centres and stunning countryside has captured the imagination of rugby fans everywhere.

Over 400,000 foreign visitors are anticipated to travel to Japan for the tournament.

This, combined with the huge interest among the Japanese rugby public, has driven the unprecedented demand for tournament tickets.

With 48 matches played across 12 host cities stretching from the northern island of Hokkaido, to southern island of Kyushu, visiting fans will get to experience the amazing regional diversity Japan has to offer while being a part of the world’s premier rugby tournament.

The level of interest creates a great sense of momentum going in to the next ticket sales period beginning on 19 September, when fans will have another opportunity to get their hands on match tickets for what promises to be a unique and special Rugby World Cup with a fantastic atmosphere in the twelve stadiums and throughout Japan.”

The next opportunity to secure tickets begins on September 19 with the opening of the General Ticket Sales Ballot open to the general public.

By choosing matches that are green or amber, fans have a far greater chance of being part of what is shaping up to be a truly once in a lifetime event. Rugby

World Cup 2019 Worldwide Partner Mastercard is offering fans who apply for tickets using their Mastercard the chance to receive a double entry in the ticketing ballot.