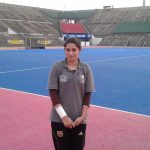 Punjab Minister for Sports & Youth Affairs, Jahangir Khanzada was the chief guest. He was received by the Secretary General PHF, Shahbaz Ahmad.

It was an interesting duel and the UWHA avenged their only loss in the league phase against the Punjab Whites; interestingly by the similar scoreline.

UWHA were quick off the blocks and forced two penalty corners in the first 10 minutes. Aqeela Nasim converted the second with a carpet shot. The advantage was doubled in the 19th minute through Afsheen Naureen.

After the double jolt, the Punjab Whites who had won all the six matches in the league without conceding a goal, recovered well. They dominated for large periods earning as many as 10 penalty corners without availing any.

Some of the PCs were poorly executed and a few were well defended by the UWHA defence. UWHA, who were good on turn overs, also had a few chances in the open play but failed to add to the tally.

Earlier in the third position match, Islamabad sprang a surprise. The capital side had finished fourth in the league. But today they defeated the 3rd placed Punjab Colours 3-0.

It is worth mentioning that Punjab Colours had beaten Islamabad 1-0 during the league phase. Saba, Saira Cheema and Sahil Malik were the scorers.