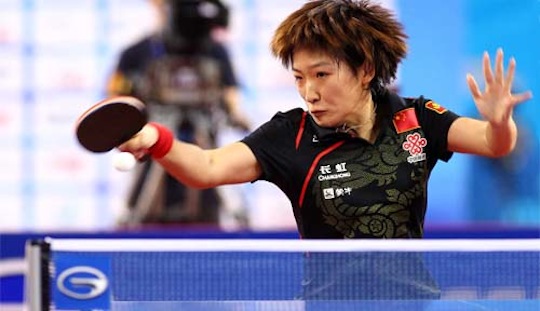 Lausanne-Switzerland, May 21, 2012: LIU Shiwen, 21 years old and currently listed at no.2 on the Women’s World Rankings, emerged as the most successful player at the GAC GROUP 2012 ITTF World Tour KRA Korean Open in Incheon on Sunday 20th May.

She partnered Chinese national team colleague, DING Ning to success in the Women’s Doubles event, the pair beating the host nation’s LEE Eun Hee and Park Young Sook in the final, before overcoming her partner, who occupies the no.1 position on the World Rankings, in the Women’s Singles final.

Earlier in the day at the semi-final stage, DING Ning had beaten colleague LI Xiaoxia, who stands at no.4 on the World Rankings but in the final was not able to match the consistency of LIU Shiwen. The champion elect surrendered just on game in beating reigning World champion.

In Rotterdam at the GAC GROUP 2011 World Championships, DING Ning had beaten LIU Shiwen at the semi-final stage; however, when they next met on the big stage at the ITTF Pro Tour Grand Finals in London in late November 2011; LIU Shiwen extracted revenge in the most severe fashion. She beat DING Ning in four straight games; in Incheon she very much repeated the dose.

Defeat for one reigning World champion but for second it was success; ZHANG Jike beat Chinese national team colleague, XU Xin, in a dramatic seven games duel to clinch the Men’s Singles title, having earlier in the day beaten WANG Hao, his predecessor as World champion and doubles partner in Incheon.

Gold in the Men’s Singles event but for ZHANG Jike alongside WANG Hao in the Men’s Doubles final, he had to settle for silver. The duo suffered a straight games final defeat at the hands of MA Long and XU Xin, the reigning World champion.