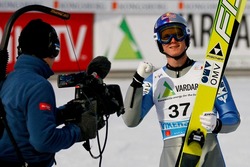 Oberhofen, June 27, 2013: The television coverage report from the 2012/13 season provided by data provider Repucom summarises the detailed viewing figures from the FIS World Cup series. It features highlights such as the overall total broadcasting time estimated at 6’593 hours across the annually measured countries with the total cumulated TV audience for the seven FIS World Cup series in the Olympic disciplines at approximately 7’927 million television viewers.

In terms of both broadcasting time and audience, the Audi FIS Ski World Cup accounted for the highest volume with 3’221 hours and a total audience of 2’591 million. As a consequence of a season including the FIS Alpine World Ski Championships in Schladming fewer World Cup events have taken place compared to the 2011/2012 season and therefore there is a small decrease of broadcasting time and cumulated audience. Compared to the 2010/2011 season which also included FIS Alpine World Ski Championships in Garmisch-Partenkirchen (GER), media impact remained stable, despite less cumulated audience, but compensated by more broadcasting time. In Alpine Skiing, five countries (AUT, GER, ITA, SWE, SUI) and the Pan-European coverage by Eurosport generate more than 81% of the media impact (a combination of broadcasting time and audience), as in the previous season.

The respective figures for the men’s FIS Ski Jumping World Cup presented by Viessmann are 1’090 hours of broadcasting time and 2’315 million audiences and for the FIS Cross-Country World Cup presented by Viessmann, 1’135 of broadcasting time and 1’865 audience. Compared to the World Championship season in 2010/11, in particular the broadcasting figures for Cross-Country Skiing have seen a large rise of close to 25%.

Overall, Ski Jumping remains the discipline with the highest media impact of all FIS disciplines with close to 40% of broadcasting time generated by live coverage. This figure will be further optimised by the introduction of fixed starting times for the competitions during the next World Cup season. Meanwhile, the ladies’ FIS Ski Jumping World Cup saw a substantial 30% increase in media impact in only its second season.

Moreover, it should be noted that seasonal highlights like the Tour de Ski in Cross-Country Skiing and the Four-Hills-Tournament in Ski Jumping each generate one third of the total media impact in these disciplines showing the attractiveness of these formats.

Based on the viewing figures published by the European Broadcasting Union, the TV and marketing rights holder of the FIS World Ski Championships in the Alpine and Nordic events 2013, they were seen by almost 1.1 billion people worldwide. While some 632 million cumulative viewers watched the 855 hours of coverage (live, delayed, news or highlights) from the FIS Alpine World Ski Championships 2013 in Schladming (AUT), the total coverage of more than 714 hours from the Nordic events in Val di Fiemme (ITA) was enjoyed by more than 444 million global TV viewers.