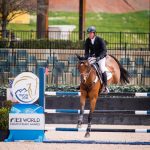 The winning pair finished on a score of 28, ahead of Kim Severson (USA) aboard Cooley Cross Border who secured a final score of 32.10, followed by Sharon White (USA), piloting Cooley On Show, to collect third place after the three phases and finishing on a 32.90. 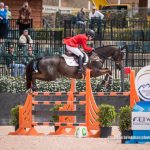 “You never quite know how tight the time is going to be,” said Dutton of the show-jumping course. “It’s an advantage going at the end and realizing the lines you have to take to shave the time.

My guy is not at his best if I open him up too much toward the jump, so I had to cut the turns, shorten him at the jumps, and rock him back just a bit. Everybody said they were worried that I wasn’t going to make the time, but here we are.” 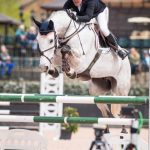 Dutton competed two other horses throughout the weekend in the FEI CIC 3* division, but it was the 2008 Zangersheide gelding (Asca x Bellabouche) owned by T. Tierney, S. Roosevelt, S. Lacy, A. Jones, and C. Moran who ultimately ended the competition in the winner’s circle. “Coming here is great experience for him,” Dutton explained.

“He’s an up-and-coming horse and I’m trying to help him understand what to do in every phase, as that’s my job to educate him. The cool part of it for me is seeing him produced. Getting to this level and then hopefully the next level, and being confident and having enough skills that he’s going to be able to succeed.”

Severson’s run on cross-country impacted the duo’s score slightly, but proved to help their standings after moving back to second place following their show jumping round, a position they held following the first phase of dressage. “He was good yesterday,” she noted of the Cross Syndicate owned 2007 Irish Sport Horse gelding (Diamond Roller x Whos Diaz).

“He started out jumping pretty high and I was a little careful because I just wanted to make sure that I gave him a good ride. After the water he really picked up and got faster. I didn’t give him the greatest ride into that first set of corners.

That stride going in makes that two really long, but he fought for it and he was really good. Down there on cross-country, he’s so much fun. You can just gallop and he’ll do it if he can do it. He’s such a nice horse.”

Sharon White and Cooley On Show, her own 2007 Irish Sport Horse gelding (Ricardo Z x Jogantina) saw a positive shift in their overall placement, as they climbed up the ranks from eleventh to third by the end of the weekend. White, of Summit Point, WV, had nothing but praise for her competitive mount.

“He’s a fabulous horse and he’s strong in all phases,” commented White. “He’s definitely getting better. He loves the sport and he loves competing, so he’s definitely a good competitor no matter what.

My job was to not get in the way and let him be who he wants to be. He really enjoys all three phases. His dressage is getting stronger, cross-country is fun with him. He’s got such a big stride and a lot of scope.”

“With the show jumping, I thought it was really interesting that the time was so tight and scores were tight. That was a bit of a challenge and we just wanted to see if we could do it.”

The week served as a WEG Test Event and riders caught a glimpse of what is to come this September. Dutton, who has competed successfully at six WEGs, is eyeing a spot on the United States Eventing Team in five short months.

He concluded, “I certainly think that there’s a home field advantage having the Games here, and for us to be here and know the venue and get comfortable with it.

There are some disadvantages with having the Games at home, with distractions and what else, so we might as well make the most of being able to get use out of this venue ahead of time and feel comfortable when the team gets here for September.”

The Advanced-A Division saw Lynn Symansky of Middleburg, VA and Under Suspection return to the top position as the weekend came to a close, jumping out of second place to finish on a score of 37.50, while Leslie Law of Ocala, FL, achieved second place aboard Voltaire de Tre, scoring 38.60. Symansky also rounded out third place honors with 44.60 aboard Donner.

Lauren Kieffer of Middleburg, VA, and Veronica stole the Advanced-B Division, finishing their final show jumping phase on a score of 36.90. Leslie Law and The Apprentice earned second place honors after finishing with 47 penalties, and third place was awarded to Boyd Martin of Cochranville, PA, with Steady Eddie, on 47.10.

Emma Seely, Chef d’Equipe for USA Vaulting, said she was pleased with the way the Test Event for the FEI World Equestrian Games™ Tryon 2018 unfolded. “We absolutely enjoyed [our time]. We’re happy to be here and it’s always good to have a feel for the lay of the land, so to speak. I’m happy to see all the improvements with the arenas and what future improvements are coming.

It’s very exciting for us,” she said, elaborating on her favorite aspects of the facility. “We like the barns – that feels good for the horses – and we like the footing. It’s always good to have a sense of how it’s going to be, but we realize it’s going to continue to evolve, but it’s been really great to be here.”

Vaulting will take place during the second week of competition during the WEG at TIEC and is expected to draw the top Vaulting athletes from around the world to Western North Carolina. Seely, who will oversee the management and coaching for Team USA during the event, is excited to have the major championship on U.S. turf for only the second time in the event’s history.

“Essentially, as Chef d’Equipe, I’m kind of the team manager,” Seely explained. “For the spring, and through the selection trials through July, I’m just going to observe and see what they’re doing, how they’re doing, and what their game plans are, so that when we get the team selections I’ll have a sense of their processes and be able to support them in being the best they can be.”

Team bonding is a priority for Seely, who is already looking forward to team preparations ahead of the event. She commented, “In general, the community is small enough that they do already know each other, but I really do want to bring them together so that they support each other and so that we come in as a strong family unit, just ready to power through.”

Squad: Canada’s “Beauty and the Beast” Squad were awarded top marks for their unchallenged performance aboard Habakkuk, with lunger Karin Schmidt on a total score of 6.872.

Individual Female: Top honors went to Mary McCormick (USA) aboard Paris, with lunger Christian Ramos, finishing on a score of 7.468. Stephanie Dore (AUS) aboard Vision and with lunger Jane Delano Kopperl were awarded second place with a 6.424 final score, while Jeanine Van Der Sluijs (CAN) aboard Charles the Great followed just behind on 6.400 with Karin Schmidt on the lunge.

Alejandra Orozco Viscaino (MEX), together with Vision and lunger Jane Delano Kopperl, earned a total of 5.743 to finish fourth.

McCormick commented that her experiences at TIEC have helped her feel prepared for the WEG to come, stating, “In 2010 it was essential for me that Kentucky felt like home turf and that we’d been there before, so that when we showed up to the venue and there was all the frenzy going on with preparations for the WEG, we knew exactly where all the wash racks were, and just knew what to expect.

From Tryon, McCormick will travel six days to California and will spend time competing and performing. If selected for Team USA in September, McCormick will come back to the Tryon region as early as she can, she said. “I’m totally confident after today.

I got a qualifying score for a certificate of capability, which takes the pressure off going forward, and the whole experience has been really fun and relaxed for us, so I can build on that and remember that feeling going forward.” —- WEG / Photo Credit ©ShannonBrinkmanPhotography & ©TIEC