Kuala Lumpur, July 17, 2018: Malaysia’s Lee Chong Wei can expect a bumpy start to his quest for a first World title when he tackles Brice Leverdez in the opening round of the TOTAL BWF World Championships 2018 in Nanjing, China.

The Men’s Singles second seed crashed out of last year’s World Championships to the Frenchman at the same stage, which signalled Lee’s earliest exit from the event following a series of silver medal-winning performances.

The Lee-Leverdez blockbuster was one of the many interesting early clashes that materialised when the TOTAL BWF World Championships 2018 Draw Ceremony conducted at the BWF office in Kuala Lumpur today. 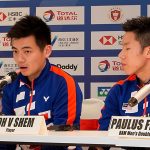 Reigning World champion Viktor Axelsen (Denmark) is seeded to face Olympic champion Chen Long (China) in the quarter-finals, while other Chinese big names such as Shi Yuqi and five-time champion Lin Dan might run into each other in the third round of the second quarter (TOTAL BWF World Championships).

Chinese Taipei’s Tai Tzu Ying – winner of four events this year – might have to contend with USA’s Beiwen Zhang in the third round, and China’s He Bingjiao or Canada’s Michelle Li in the quarter-finals.

Reigning champion Nozomi Okuhara (Japan), could face either compatriot Aya Ohori or Malaysia’s Goh Jin Wei in the third round.

A quarter-final clash against India’s Pusarla V Sindhu – against whom she triumphed in an epic World Championships final last year – is a distinct possibility.

Defending World champions Liu Cheng/Zhang Nan (China) are seeded second and have a tricky road ahead, with the likelihood of facing Hong Kong’s Or Chin Chung/Tang Chun Man in the second round and Japan’s Hiroyuki Endo/Yuta Watanabe in the third.

Top seeds and defending champions Chen Qingchen and Jia Yifan (China) have not won a tournament this season, and will look to redeem themselves at the World Championships at home.

The feature of the Women’s Doubles draw is the presence of the top four Japanese pairs – including Olympic champions Misaki Matsutomo/Ayaka Takahashi and World Championships silver medallists Yuki Fukushima/Sayaka Hirota, who are in separate halves.