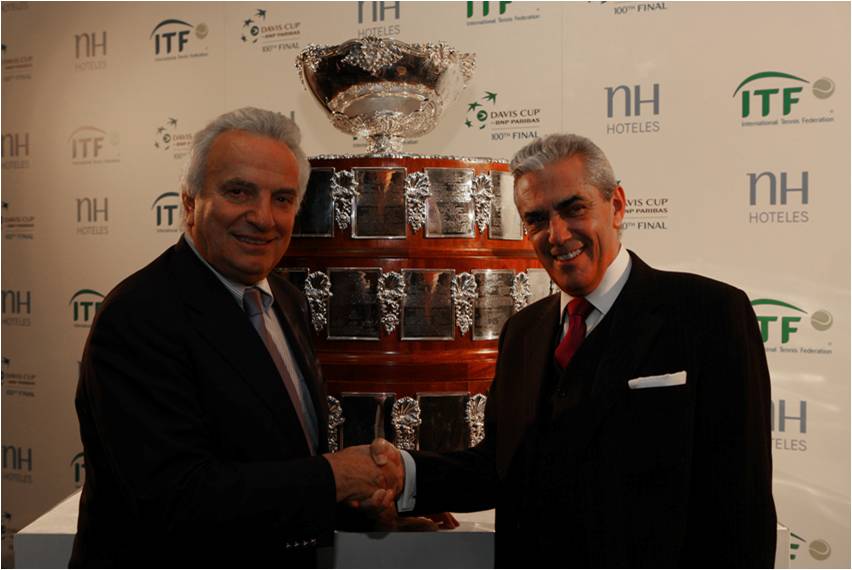 London – GBR, Nov 18: The International Tennis Federation (ITF) announced today that NH Hoteles has extended its sponsorship of Davis Cup by BNP Paribas for an additional three years, through 2015. The agreement was signed in Prague on Saturday during the 2012 Davis Cup Final at the recently opened NH Prague hotel. NH Hoteles joined the Davis Cup family as an international sponsor in 2004.

ITF President Francesco Ricci Bitti, who was present at the signing, said: “We are delighted that NH Hoteles is extending its sponsorship of Davis Cup by BNP Paribas for a further three years. NH Hoteles has been a loyal and hardworking partner of Davis Cup, and we believe that the competition is a perfect fit for a company that has enjoyed strong international growth since joining the Davis Cup family. Davis Cup continues to benefit from the commitment and enthusiasm of all its sponsors in maintaining its status as one of the most prestigious competitions in sport.”

Mariano Perez Claver, Chairman of NH Hoteles, said: “The international profile of this unique competition makes NH Hoteles’ participation as a global sponsor of Davis Cup for almost nine years a vital tool for supporting the company’s recent expansion, and communicating the NH Hoteles’ brand through a single message to millions of spectators in more than 170 countries.”

About Davis Cup by BNP Paribas

NH Hoteles www.nh-hotels.com ranks third in the European urban business hotel segment. It operates close to 400 hotels with almost 60,000 rooms in 26 countries across Europe, America and Africa. NH Hoteles currently has 20 new hotels under construction which will add almost 2,500 new rooms to its portfolio. NH Hoteles is traded on the Madrid stock exchange. —- ITF