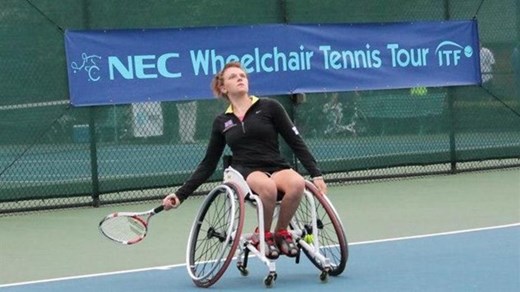 London, May 07, 2013: Michael Jeremiasz (FRA), Jordanne Whiley (GBR) and David Wagner (USA) won the men, women’s and quad titles at the Atlanta Open, part of the NEC Wheelchair Tennis Tour, on Saturday on a rain-delayed final day at this week’s ITF 1 Series tournament.

As the day’s finals were forced indoors, Whiley won the last three games of the first set in the women’s singles final before world No. 5 Shuker fought back to level the contest. However, Whiley finished the stronger to claim her fourth win over Shuker in nine head-to-heads on the NEC Wheelchair Tennis Tour, with Shuker having to settle for runners-up honours in Atlanta for the second successive year.

“I’m so happy to have won my first ever singles ITF 1 title, it was a tough match, but I’m really happy with how I pulled through,” said Whiley, who reached her first ITF 1 final by beating the highest ranked opponent of her career in Ellerbrock. “I can see the improvements I’ve made so far and there’s more to come.”

Earlier in the day, Shuker and Whiley teamed up to retain the women’s doubles title. A year on from winning their first ITF 1 doubles title as a partnership in Atlanta, the British top seeds and London 2012 bronze medallists won their fourth ITF 1 doubles crown after beating second seeds Ellerbrock and Sharon Walraven of the Netherlands.

Ellerbrock and Walraven came from a break down to clinch the second set, but having dominated the opening set Shuker and Whiley held on in a match tiebreak to seal a 61 57 (10-7) victory.

Victory brought Whiley’s tally of NEC Tour titles to four in two weeks after she also won the women’s singles and doubles at the ITF 2 Series Israel Open.

There were conflicting fortunes for Jeremiasz and Maikel Scheffers of the Netherlands in the men’s singles and doubles finals.

Third seed Jeremiasz won his first ITF 1 Series men’s singles title since 2008 as the world No. 9 upset the tournament seeding to defeat Scheffers. With world No.4 Scheffers playing his first NEC Tour event since February after elbow surgery, Jeremiasz maintained his fine record over the Dutchman with a 63 64 victory that takes his head-to-head record against Scheffers to 14 wins from their 17 matches. Jeremiasz has now won two men’s singles titles in 2013 and has beaten Scheffers three times this season.

The Anglo-Dutch pairing were rarely troubled against second seeds Jeremiasz and Ben Weekes of Australia and recorded a comfortable 62 61 victory.

Wagner was always in control against Britain’s world No. 2 Andy Lapthorne and went on to clinch a 60 60 victory for his fifth NEC Tour title of 2013 and his third ITF 1 Series. It was also his first 60 60 win over Lapthorne in the 13 career victories he currently holds against the Briton. —- Photo: Jeanna Courter