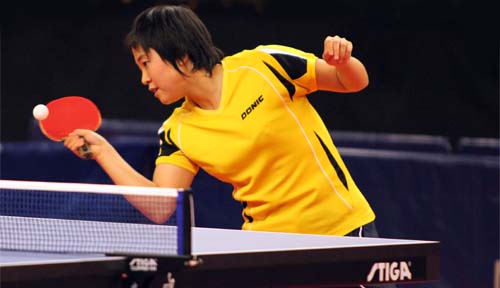 The host nation’s Hampus NORDBERG and KIM Song I from the Democratic People’s Republic of Korea emerged as the respective Men’s and Women’s Singles champions at the ITTF Euro-Africa Circuit Swedish Open, which concluded in Helsingborg on Sunday 10th Jun 2012.

Both were surprise winners; neither was seeded, both having had to compete in the group qualification stage of affairs.

At the final hurdle Hampus NORDBERG overcame compatriot Andreas TORNQVIST, the no.9 seed; whilst KIM Song I accounted for Russia’s Polina MIKHAILOVA, the no.3 seed, at the same stage.

Defeat for Polina MIKHAILOVA but the result means that on the Women’s Standings she is clear of the field; in all three ITTF Euro-Africa tournaments to date, she has reached the final.

Furthermore, she was the only player to extend 17 year old KIM Song I the full distance.

A Girls’ Singles quarter-finalist at the 2010 Youth Olympic Games in Singapore; KIM Song I stole the show. At the quarter-final stage one day earlier she had beaten Hungary’s Szandra PERGEL before accounting for Russia’s Margarita FETUKINA. (11-9, 11-2, 11-8, 12-10).

Thus on her route to gold in Helsingborg KIM Song I had beaten the two previous Women’s Singles winners on the ITTF Euro Africa Circuit. Szandra PERGEL had won in Zagreb.

Defeat for Polina MIKHAILOVA but she was able to leave Helsingborg with a sense of pride. At the semi-final stage she had ousted the top seed, Hungary’s Georgina POTA.

Meanwhile for 24 year old Hampus NORDBERG there were no seven game dramas on the concluding day of play; in an event that saw all four semi-finalists from Sweden. He overcame Harald ANDERSSON in five games at the semi-final stage and Anders TORNQVIST by a similar margin in the final to collect his first ever international title.