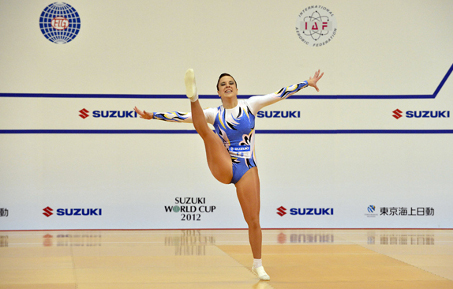 Moreno’s routines were awarded the highest artistic scores, which brought her the decisive advantage over her contenders. She had a 20.700 total in the Final, outranking China’s Huang Jinxuan (20.400) and Aurélie Joly of France (20.400), both ahead of her during Qualifications.

In Mixed Pairs, the French pair Joly and Julien Chaninet defeated China’s Yang Guang and Ma Chao (20.950) as well as Moreno and Vicente Lli (20.950) to take the Gold. Top qualifier Korea prevailed in Trios, scoring a 21.800. With Romania falling back to fifth place in the Final, China (21.750) and France (21.600) moved up to the medal ranks. The Aerobic elite will now turn to Ponta Delgada (POR), Azores, for the ultimate World Cup before the season’s highlight, the 12th World Championships in Sofia (BUL).

The FIG Aerobic Gymnastics World Cup circuit includes five category B events, all of which feature Qualifications and Finals in Men’s and Women’s Individuals, Mixed Pairs, Trios and Groups.

Participation is limited to two gymnasts, pairs or groups per country in each category. The top eight gymnasts per category from the Qualifications proceed to the Finals. In addition, should the host country fail to qualify in all categories, it may nominate one participant for a single category of its choice.

The world ranking points collected by the competitors during the circuit will add up to a total with the best four results counting, and the top scorers in each discipline will be crowned the winners of the overall series at the ultimate event in Kufstein.