Lausanne, Aug 31, 2017: The International Table Tennis Federation (ITTF) has announced two senior staff appointments. Steve DAINTON, who has been the Acting CEO for the past two months, has now been appointed as the permanent CEO. Raul CALIN, who has been serving as the ITTF Director of Operations will assist DAINTON as the ITTF Secretary General (Steve DAINTON Raul CALIN). 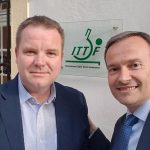 On the appointments, ITTF President Thomas WEIKERT stated: “Both Steve and Raul have both been extremely loyal to the ITTF over their many years of service, and have been instrumental to the growth of the ITTF over recent years.

ITTF Executive Committee and I have complete trust in both of them to excel in their new positions and guide the ITTF to a new fruitful era.”

39-year-old Australian DAINTON started playing table tennis as a child with his father in the country town of Albury in Australia.

DAINTON rose through the table tennis ranks as a junior player, but turned his attention to coaching at a young age, where he produced several Australian national junior players.

Most of which was achieved whilst studying Marketing and International Studies at university where he learnt to speak and write Chinese.

DAINTON took up his first ITTF position in 2002 as the ITTF Oceania Development Officer after his university studies.

After 3 years travelling around Oceania developing the sport, DAINTON decided to merge his table tennis, marketing and Chinese language skills together and take up a position in Shanghai, China as director of the ITTF-Asia Pacific office.

After 6 successful years in China, and assisting in some big commercial deals with Volkswagen, China Unicom and various other media and sponsorship deals, DAINTON was promoted to the position of ITTF Marketing Director and moved the ITTF-Asia Pacific office to Singapore in 2011.

Over the 6 years in Singapore, the ITTF Marketing department grew from strength to strength with more lucrative deals with large companies including GAC Group , Seamaster and GoDaddy as well as started new initiatives such as the ITTF Star Awards, TTX and improved sport presentation at all ITTF’s major events.

On his promotion to the ITTF CEO position, DAINTON stated: “It’s an exciting new era for the ITTF and table tennis.

It’s the right time for the ITTF to realize its true commercial potential and modernize itself to ensure that table tennis cements itself as one of the leading sports globally at all levels.

I am looking forward to helping to ensure this and to especially assist in growing the table tennis industry to new levels, meaning not only more people playing table tennis, but also more people actively engaged. If we get it right this will ensure the true stars, the athletes ,will be better recognized and rewarded.”

DAINTON will be assisted by Raul CALIN, who has been appointed in a newly created Secretary General position and will continue to be based in Lausanne to focus on ensuring ITTF’s positive Olympic relations.

45-year-old CALIN from Spain has been playing, coaching and administrating table tennis since 1991 with his proudest moment on the table being coaching the Spanish team to one gold, one silver and two bronze medals at the 2000 Paralympics.

CALIN joined the ITTF in 2004 as a Competition Manager and has had many big achievements since, such as being a part of the successful team that built the ITTF Global Junior Programme and running the successful Rio 2016 table tennis event.

“I am looking to help build ITTF into a modern organisation, with transparency in all levels of management, with ambition and clear goals. ITTF should look for excellence in all areas,” stated CALIN.

“An institution in which national associations interact actively with the ITTF management for the benefit of our athletes and fans. Let’s work towards excellence in our sport events, let’s have ambition, let’s make an ITTF everyone is proud of.”

More changes to the ITTF professional structure will be announced in the coming months. —- ITTF