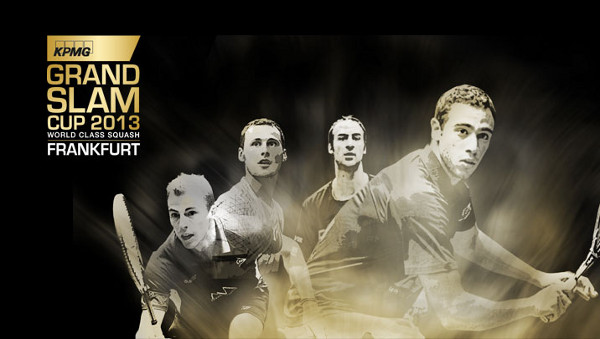 London, April 09, 2013: Four of the leading squash players in the world will come together to compete for the inaugural KPMG Grand Slam Cup in Frankfurt, Germany, on 8 May 2013.

Home interest will be covered by German No1 and World No12 Simon Rosner, recent winner of a seventh successive German national title.

A state-of-the-art all-glass ASB ShowCourt will be erected inside the building’s main atrium, the largest in Europe, and will be surrounded by a temporary dinner-theatre style arena for the unique night of elite pro competition.

The court will be used for the remainder of the May 6-9 event period for public and corporate squash programming and free instruction and exhibitions.

“The Grand Slam Cup offers sports fans of any sort an unparalleled opportunity to experience the very best squash has to offer in a spectacular setting,” said event promoter John Nimick of Event Engine, long-time promoter of the sport’s iconic Tournament of Champions in New York’s Grand Central Terminal.

“Ashour, Matthew and Gaultier are the great players of the era and Rosner will have home country advantage and support! This is a can’t-miss event,” added Nimick.

Event Engine is a global partner of the Welldone Agency Group, which is headquartered in Frankfurt and is the Executive Producer of the KPMG Grand Slam Cup.

The spectacular 10-ton ASB ShowCourt consists of 32 separate panels of 12 mm tempered safety glass allowing one-way viewing. While the audience surrounding the court walls on all four sides can see clearly into the court, the players perceive solid surfaces on the front and side walls.

All-glass courts has been used to showcase squash in some of the world’s most iconic locations such as Grand Central Terminal in New York, the Hong Kong waterfront, Kuwait’s Green Island, and Luxor and the Great Pyramids of Giza in Egypt.

The one-night-only Grand Slam Cup format features semi-finals and final, each played two games to 11 points with a one or three point shootout tiebreaker if the match score is one-all. The players will play a one point tiebreaker if a game is tied 10-10. A one game third place playoff ensures each marquee player plays twice.

The KPMG Grand Slam Cup will be presented as an all inclusive VIP hospitality event, including a meet and-greet with the squash stars, special reception, courtside table seating, dinner and beverage service, complimentary parking and an after-event party. Sponsorships range from  15,000 – 7,500.

Individual tables with seating for four guests are available starting at 500. For sponsorship, tables and information, please visit www.grandslamsquash.com