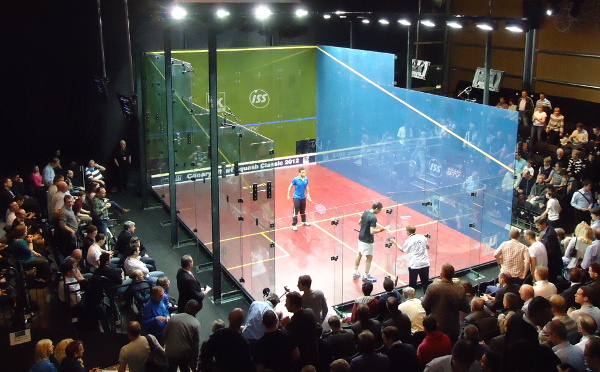 The four-sided glass court, donated by Courtwall (pictured below), will be used throughout July and August for a non-stop series of local tournaments, company events, junior training and open days.

The aim is to attract new participants to a sport recognised worldwide as being the best for fitness, and one which is bidding for inclusion in the 2020 Olympic Games.

Squash is already a popular sport in the region, with major events being regularly staged in Kuwait, Qatar and Saudi Arabia; and with the Asian Junior Championships being held in the Jordan capital Amman from 25-29 June.

The pair from Alexandria are both double World Junior champions: 22-year-old Mohamed in 2008 and 2009 and 19-year-old Marwan in 2010 and 2011. Mohamed has climbed to number five in the PSA world rankings, with Marwan currently at 28.

Courtwall International, one of the world’s leading racket court construction companies, hopes the exposure generated in Dubai will help to grow the sport locally as well as raise the profile of squash as it campaigns for a place in the 2020 Olympic Games.

“Mohamed and Marwan both have the ability to be future world champions and at their respective ages they could conceivably be playing each other in a 2020 Olympic final if squash wins the vote it deserves in September,” commented founder Wolfgang Denk.

“We are happy to act as sponsors of this event supported by DuPlays, and hope that this plays a part in the continuing growth of squash in the region.”