Buenos Aires – Argentina, Sept 5, 2013: The World Squash Federation (WSF) delegation that will present its case to join the 2020 Olympic Games today arrived in Buenos Aires ahead of its presentation to the International Olympic Committee (IOC) Session on Sunday. Squash is one of three sports being considered by the IOC for inclusion in the 2020 Olympic Games, but the only one never to have featured in the Games.

Members of the WSF delegation will be unveiled at a media briefing at the Hilton Hotel (the IOC official hotel) in Buenos Aires on Friday 6 September at 1530. 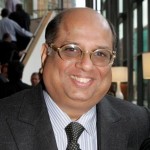 Speaking upon their arrival in Buenos Aires, WSF President and head of the delegation N Ramachandran said:

“This is the third consecutive bid by Squash to join the Olympic Games so our journey to get here has been a long one – 10 years in fact. We have learnt an enormous amount in that time. We have listened to the IOC, taken on board their advice and as a sport we have truly evolved and embraced innovation. There can be no doubt that Squash can offer something exciting and fresh to the Olympic experience, and we are proud to be the only new Olympic sport on the shortlist.

“Squash would be low cost and easy to integrate into the Games with just 64 athletes. We could share a venue if required, or be located to showcase an iconic backdrop – and we have a track record of doing exactly this, such as in front of the Pyramids.

“We are a genuinely global sport played in 185 countries by many millions across the world. We are growing in regions such as South America, central Europe, China, and India as well as in the more traditional Squash areas including the United States, where we have over one million players. The order books of court manufacturers are the fullest they have ever been.

“Squash can honestly say that now we are more than ready. Our sport has been on a journey of innovation in recent years, especially in the way it is broadcast and presented. State of the art all-glass courts, referee video review, lighting and music have radically enhanced the spectator experience.

“Our sport also embraces gender parity and many of our key events have equality in prize money for men and women. Squash is gladiatorial, physically demanding and mentally challenging. We are already played in every major multi-sport Games and the respected Forbes Magazine has described us as the ‘world’s healthiest sport’, and of course we have a 100% doping-free record. These are themes that we will certainly bring to life in our presentation.

“On Sunday we hope to demonstrate to the IOC that Squash is a sport that represents the future, not the past.”