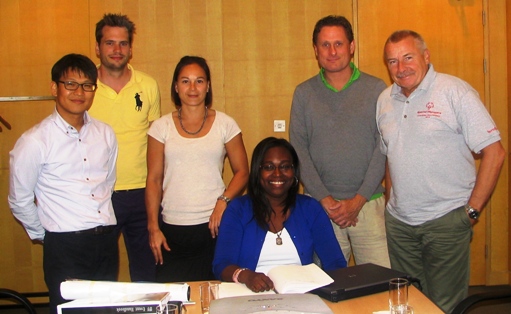 Helsinki, Finland, June 11, 2012: Special Olympics Floorball, The Special Olympics (SO) World Winter Games will be organised in PyeongChang and Gangneung, Korea, January 29th – February 5th and floorball will for the first time be included as a demonstration sport in the SO World Games.

Alternating between summer and winter, the Special Olympics World Games are one of the world’s largest sporting events, drawing as many athletes than the Olympics. Every two years since 1968, athletes from more than 100 nations have gathered to celebrate sport and showcase the abilities of people with intellectual disabilities.

The SO Floorball resource team met in Seoul and Gangneung on June 3rd – 5th to plan the floorball demonstration tournament and the SO Floorball vision 2015.

Floorball to be played during the opening days

– This shows that floorball is already a very popular SO sport. Our aim is to divide the teams into two groups teams based on the divisioning into two groups as we hope to see tight matches. The divisioning is a kind of pre-evaluation of the team’s performance, which takes place before the actual tournament. We will then divide the teams according to their performance in the test matches, Jonas Hviid floorball resource team member informs.

There are also other ways of divisioning the teams with Individual Skill Contest (ISC) where the players ball handling skills and shooting skills are evaluated. All players will also perform the ISC both before and during the tournament in order to compare the results.

– During the brainstorming session there were a lot of new ideas put forward and the IFF will assist the SO Floorball team in providing access to the available IFF information and educational materials that the SO team can adapt to fit the SO world. In addition we have a chance of making new promotional material that both the IFF and SO can use for promoting floorball, Merita Bruun, the IFF SO representative, informs.

Venisha Bowler, the Senior Manager of SOI Sports Department, was impressed with the outcome of the meeting:

– The meeting was extremely productive with a lot of energy great ideas on ways to grow the sport from all the participants. I think floorball is a great choice for a SO sport and a we welcome this opportunity for SO athletes to have a new choice to choose from in the SO sports world. We also appreciate the efforts of both the IFF and the Korean Floorball Federation and look forward to a continuous cooperation.

KFF involved in the SO World Games project

The Korean Floorball Federation (KFF) will have a busy start of the 2013 as they will take part in organising the SO Floorball demonstration tournament.

– We will organise trainings for the SO floorball players in order to prepare the Korean SO team for their first SO IWG participation. We will also help with refereeing the matches during the tournament and in other organisational tasks, Mr. Hwang Joo Kim (in photo), from the KFF explains.

During the SO Floorball Resource Group meeting some new goals were set, one of the primary aims being to get the official World Games status for floorball in the future.

– To become an official sport in the SO world games the sport needs to have over 24 programs (nations) in 3 continent. Floorball now has about 18 programs so we are already quite close. The next chance to become officially recognised by the Special Olympics International Board of Directors is in 2014 and I think that we will have a good chance then, says Special Olympics Europe director, Mr. Mariusz Damentko.

The Special Olympics International (SOI) had invited all of the SO Floorball stakeholders for a joint meeting in order for prepares the SO World Games aims and schedule for floorball.

– I am also impressed by the fact that SOI designated quite a big budget and that the IFF decided to send a representative, which gives great hope for SO floorball development and cooperation worldwide, Mr. Damentko continues.

The Sport Development Plan also includes other goals for SO Floorball:

• To host annual regional SO Floorball tournaments and seminars

– We want floorball to become the fastest growing sport within Special Olympics. For achieving this and the SO Floorball vision the bond with the IFF is of great importance. This can be considered as a win-win situation for both parties as all versions of floorball will gain more players and visibility, Steen Houman, the chair of the SO Floorball resource team concludes. More information on SO World Winter Games: http://www.2013sopoc.org/hb/en