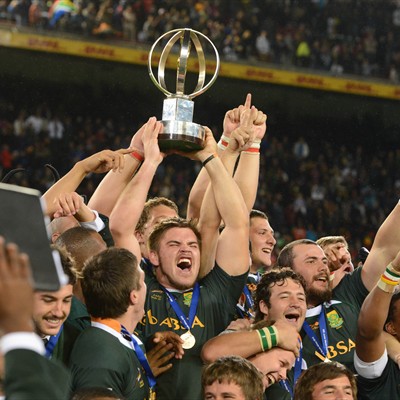 The two sides, who had each had a rocky route to the final with defeats in the pool stages, were separated by just a point after an intense first half, three Handre Pollard penalties for South Africa against a Milford Keresoma try and penalty and conversion from Ihaia West.

New Zealand kept fighting to the finish to prevent the title slipping from their grasp but could only manage a solitary penalty from West, sparking wild celebrations from the South Africans as they became the first to win a world rugby title on home soil since the Springboks at Rugby World Cup 1995.

Earlier in the day, Italy were left heartbroken after suffering a 19-17 loss to Fiji in the 11th place play-off at the University of Western Cape Stadium to condemn them to relegation to the IRB Junior World Rugby Trophy next year.

Italy will now have to regroup and win the Trophy in 2013 to return, their place in the Junior World Championship in France next year to be taken by the winner of the 2012 tournament currently taking place in Salt Lake City, USA.

While there was heartbreak for Italy, Wales and Ireland both had cause to celebrate after recording their best ever finishes in the tournament. The Welsh beat Argentina 25-3 to finish third, after Ireland had battled past France 18-7 in the first match at Newlands to secure their fifth place.

Two of the pre-tournament title contenders, England and Australia, contested the seventh place play off at UWC with England overturning a 13-3 half time deficit scoring 14 unanswered points to emerge victorious.

The first match of the day, the ninth place play-off between Scotland and Samoa at the University of Western Cape Stadium, proved an entertaining affair as Scotland ran out 62-28 victors.