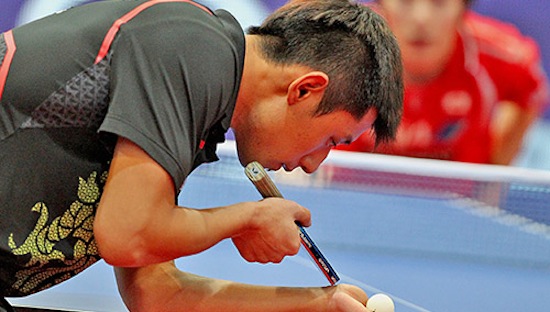 Lausanne, Feb 05, 2012: China’s DING Ning, the reigning World champion retains her top billing on the Women’s World Rankings, issued by the International Table Tennis Federation on Monday 4th February 2013, but for her compatriot and counterpart, ZHANG Jike, both Olympic and World champion, he falls one place.

He changes places with team mate MA Long and is now at no.3; the drop is a direct result of the shock defeat he suffered at the hands of Japan’s Taku TAKAKIWA at the quarter-final stage of the Men’s Singles event at the ITTF 2013 World Tour Austrian Open in Wels in late January.

Conversely, Taku TAKAKIWA climbs from no.45 to a career high no.29.

XU Xin, likewise from China, who ascended to the no.1 spot in January, following his success at the GAC GROUP 2012 ITTF World Tour Grand Finals in Hangzhou in December, remains in top spot with Chinese National Team colleague, WANG Hao and Germany’s Timo BOLL retaining fourth and fifth places respectively.

FANG Bo, also from China, who won in Austria, moves from no.74 to no.24; whilst Brazil’s Cazuo MATSUMOTO, the surprise winner in Spain, is now at no.84. Previously he was ten places lower at no.94; it is for both FANG Bo and Cazuo MATSUMOTO, the highest ranking of their careers.

Meanwhile, in the Women’s World Rankings, the top six remain the same as one month earlier. DING Ning, the winner on the ITTF World Tour in Austria is followed by compatriots, LIU Shiwen, LI Xiaoxia and GUO Yan. Korea’s KIM Kyungah remains in fifth place one spot ahead of Singapore’s FENG Tianwei.

Next in the order of merit is SHEN Yanfei, the runner up in Spain; she changes places with Japan’s Ai FUKUHARA, whilst Hong Kong’s JIANG Huajun, the winner in Spain, moves back into the top 20; she is now at no.17, formerly she was at no.21. —- ITTF/Photo by Plohe