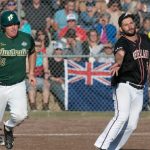 New Zealand scored first in the suspenseful Finale when Campbell Enoka walked in the first inning and reached third through aggressive base running. Nathan Nukunuku then hit a sacrifice fly to push Enoka across the plate for the first run of the game.

Australia took the lead in the third as Julian Jemmott reached on a lead-off single and was driven in off a James Todhunter single to left field. With the bases loaded, Andrew Kirkpatrick flied out to left field to score Ryan Sinclair, who reached after being hit by a pitch, to give the Aussies the 2-1 lead.

Australia extended their lead in the fourth, adding a run as Liam O’Leary walked and was later driven in by Sinclair for the 3-1 lead.

The Steelers got in trouble in the fifth as the Black Sox loaded the bases with one out. Brad Rona then hit a fly ball to right-center to push in Enoka to decrease the deficit to one run. But Adam Folkard got out of the inning, snagging a high grounder for the put-out, still ahead 3-2.

New Zealand reclaimed the lead in the sixth when Joel Evans blasted a huge two-out grand slam for the 6-3 lead.

With the capacity crowd on their feet, Australia tried a comeback as Nick Shailes hit a solo home run with two outs to bring the game to 6-4, but a ground-out to third ended the game giving New Zealand a record seventh Men’s Softball World Championship title.

ROAD TO THE FINALS

New Zealand (6-1) finished atop Pool B to qualify into the Championship Round. In the playoffs, they defeated Australia, 6-2, to advance to the semi-final game against Canada.

Australia (5-2) finished with the 2nd seed in Pool B to qualify into the Championship Round. They then lost to New Zealand, 6-2, forcing another game against USA, where they won 11-7 to advance to the semi-final game against Argentina.

In the semi-final games, New Zealand defeated Canada, 12-11, to advance to the gold medal game, while Australia defeated Argentina, 4-1, to face Canada in the bronze medal game.

In the bronze medal game, Australia continued to have its bats going, scoring seven runs on eight hits against Canada. The 7-3 defeat left the 2015 World Champion Canada with the bronze.

Australia scored three runs in the second inning and four innings in the fifth. James Todhunter hit 3 RBIs, including a home run, to lead the Steelers’ offense. Adam Folkard (3 H, 0 BB, 7 SO) earned the win, his second in seven appearances. The win then advanced Australia to the gold medal game.

The 15th Men’s Softball World Championship in Whitehorse brought together 16 national teams from all five regions, as India and Turkey made their men’s world championship debuts.

The 16th Men’s Softball World Championship will be held in Prague, Czech Republic, in 2019.