Dublin, Aug 26, 2017: The latest chapter of the Women’s Rugby World Cup story between England and New Zealand did not disappoint with fans lucky enough to be in the Kingspan Stadium or watching around the world treated to a pulsating final that ended with the Black Ferns triumphing 41-32 on Saturday (Rugby World Cup 2017). 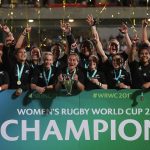 New Zealand scored seven of the 11 tries in a match that was the proverbial game of two halves, recovering from 17-5 down in the first half to dominate possession and territory in the second to win the World Cup for the fifth time and ensure they also remain top of the World Rugby Women’s Rankings.

Prop Toka Natua scored a hat-trick in the final in Belfast to ensure New Zealand captain Fiao’o Faamausili bowed out with her fourth title and the Black Ferns remain unbeaten in World Cup finals and against England in the showpiece event in the women’s game.

France joined New Zealand and England in the post-final festivities after edging an entertaining bronze final with USA 31-23 with captain Gaelle Mignot among their try-scorers.

VIEW RESULTS >>
Canada overcame a fast-starting Australia to finish fifth with a 43-12 victory, while Wales won their own final, beating hosts Ireland 27-17 to finish seventh and the final direct qualification place for WRWC 2021.

The final day also saw wins for Japan over Hong Kong in the 11th place play-off and Italy, who needed an extra-time try from captain Sara Barattin to beat Spain 20-15 for ninth place.

A dominant second-half performance saw New Zealand come storming back to end England’s reign as champions and claim the title for the fifth time in a final that was played out in a cauldron of noise from start to finish.

The three previous World Cup finals between the nations had each been a classic in its own way and the excitement crackling around the Kingspan Stadium during the anthems and Black Ferns’ haka signified that the crowd expected more of the same from the top two nations in the world.

Defending champions England had started the better with a probing kick by Katy Mclean helping to keep New Zealand deep in their own half in the opening minutes, but they were unable to turn that early pressure into points and instead a cross-field kick from her opposite number Victoria Subritzy-Nafatali created the opening try.

It was meant for Portia Woodman, but dropped in front of her and the ball fortuitously bounced up into the arms of Selica Winiata, the full-back leaving her opposite number Emily Scarratt in her wake to run in the opening try after eight minutes.

Scarratt required lengthy treatment and went to the sidelines briefly to have her left ankle taped, but returned and put England on the board wtih a 15th minute penalty to the delight of the England fans in the crowd.

England received another boost when referee Joy Neville ruled that New Zealand flanker Sarah Goss had lifted Mclean above the horizontal, earning the Olympic silver medallist a trip to the sin-bin for 10 minutes.

In her absence, England thought they had scored when second-row Tamara Taylor went over the line, but Kelly Brazier managed to get her arms under the ball to prevent it being grounded.

However, from the resulting scrum England got the drive on and referee Neville ended up under the posts signalling for a penalty try. —- World rugby