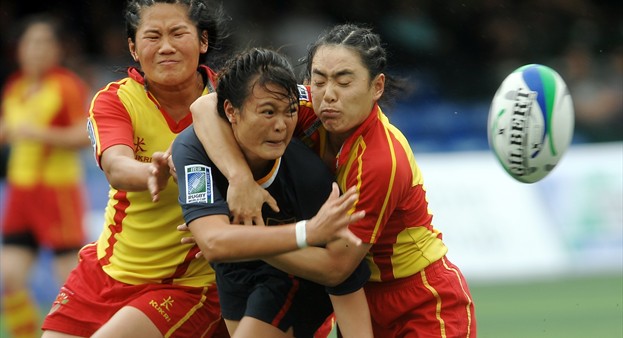 Asia is one of the fastest-growing Rugby regions and the IOC’s decision to include Rugby Sevens in the Olympic Games programme from 2016 has opened new opportunities for the women’s Game in Asia with National Olympic Committees providing support to several Unions.

This weekend’s tournament promises to be highly competitive with 15 nations battling for three places at RWC Sevens 2013 in Moscow, with China, Japan, Fiji and Kazakhstan among those tipped to be in the mix for qualification.

Following the recent dramatic Asia-Pacific Women’s Sevens Championship where Hong Kong upset the odds to defeat China and Japan defeated world champions and eventual winners Australia, the ARFU Sevens will be compelling, especially with Fiji in the mix.

The Fijians missed out on qualification for RWC Sevens 2009 but having finished third behind New Zealand and world champions Australia in the Oceania regional qualifier in August they gained passage into the Asian tournament.

Japan will face Hong Kong and hosts India in Pool A, while Fiji tackle Chinese Taipei, Korea and Sri Lanka in Pool B. RWC Seven 2009 Bowl winners China are joined in Pool C by Thailand, Malaysia and the Philippines with Kazakhstan, Singapore, Iran and the United Arab Emirates drawn in Pool D.

IRB Chairman Bernard Lapasset said: “There is no doubt that the inaugural Women’s Rugby World Cup Sevens in 2009 was a seminal moment for the women’s Game. Not only did the likes of China, Brazil and Uganda capture hearts and minds and sports fans around the world, they showed the immense potential of women’s Rugby outside of the sport’s traditional heartlands.”

“Guided by the IRB Women’s Rugby Plan, the women’s Game continues to make huge advances with around a million women and girls playing worldwide. Nowhere are these advances better illustrated than in Asia where China’s women are now full-time professionals. The strength of the global qualification process demonstrates that we are set for an exceptional women’s event at Moscow 2013.”

The remaining places will be filled by the three qualifiers from Pune and the South American champions, who will not be known until the CONSUR Sevens takes place in Rio de Janeiro from February 23-24.

The tournament will also provide the backdrop for the ARFU Women’s Rugby Development workshop which will bring together representatives from Asian Unions to discuss participation, development and promotional strategies to grow the women’s Game in Asia.

IRB Women’s Development Manager Susan Carty, who will be an interested spectator in Pune, said: “Asia is one of the most exciting regions in terms of the potential for the growth of women’s Rugby. Not only are national teams making strides on the world stage but participation continues to grow within ARFU Unions.”

“Driven by the Women’s Rugby Plan, this workshop will look to harness the great enthusiasm in the region, attract more women and girls to the sport and enhance the processes that will deliver a competitive pathway for Unions towards Rio 2016.”

Tickets for the Moscow showpiece are now available at www.rwcsevens.com through both Russian and English language sites and are priced from just GBP3 (less than US$5) for a day ticket and GBP8 (less than US$13) for a three-day pass as the Rugby Union of Russia look to attract new fans to a sport that has already started to capture hearts and minds within a sports-mad country where Olympic sports reign supreme.

The tournament website can be found at www.rwcsevens.com. —- IRB