By Gayle Alleyne, Kuala Lumpur, Mar 17, 2017: Denmark and Indonesia, who played an epic Thomas Cup final last year, have been drawn together – along with India – for the TOTAL BWF Sudirman Cup 2017 (Royal beckons). 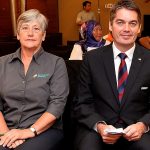 The three nations, all boasting a variety of star quality, were thrown together in arguably the hardest sub-group (1D) of the BWF World Mixed Team Championships when the draw was made today in Kuala Lumpur, Malaysia, in the presence of the deputy tournament referee, BWF Council members, team officials and media. The event will be held in Gold Coast, Australia, from 21 to 28 May 2017. 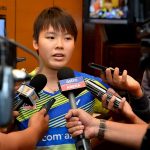 The original list of 32 teams was pared down to 28, with four teams – Mexico, Netherlands, Spain and Sweden – withdrawing over the last few days. The 28 participating teams were divided into four groups, with Group 1 consisting of the 12 teams that will compete for the title. Group 2 and Group 3 (eight teams each) will fight for overall placings.

Top seeds China and No.2 seeds Denmark were placed at the head of sub-groups 1A and 1D respectively and the other teams were picked by lot according to their respective seedings. BWF Events Chair Peter Tarcala; President of Badminton Australia, Geraldine Brown; Australia’s High Commissioner to Malaysia, Rod Smith, and Acting President of Badminton Association of Malaysia (BAM), Tan Sri Mohamed Al-Amin, assisted in picking the draw.

Defending champions, China, who have won the title on all but four occasions since the tournament started in 1989, will have to battle Thailand and Hong Kong in sub-group 1A. Sub-group 1B has Korea, Chinese Taipei and Russia, while sub-group 1C has Japan, Malaysia and England.

Sub-group 2A consists of Germany, Vietnam, Scotland and Canada. Hosts Australia are in sub-group 2B with Singapore, USA and Austria.

Group 3 also has eight teams, divided into two sub-groups: 3A consists of New Zealand, New Caledonia, Macau and Guam, and 3B has Sri Lanka, Slovakia, Tahiti and Fiji.

“The Sudirman Cup has seen epic battles since its inception in 1989,” he noted. “I firmly believe it will continue to see epic battles this year too.”

President of Badminton Australia, Geraldine Brown, said the popular destination is geared up for the tournament.

“There will be some interesting matches. It’s more open than it’s ever been and we’re in for a very exciting time. As for Australia, we’re excited to be in the second group. We have got a good draw. All the preparations are on track. People are in Gold Coast making the final arrangements, we’re all very excited. The city has been supportive, Tourism and Events Queensland has been supportive and everything is ready for a wonderful event.”

Though noting China are still favourites, Frost said there is a possibility Malaysia could go all the way to the title: “It’s a balanced draw. It’s very interesting. I feel this year it’s a very open draw. After the Olympics, there’s always a rebuilding of teams. The Men’s Doubles becomes the key for all teams. Those who win the Men’s Doubles have a chance of winning the tie.

“Malaysia has a chance to win the tournament. We’re improving in Women’s Doubles and we will see how our young Women’s Singles player (Goh Jin Wei) will do. We have a fair chance. Our target is to reach the semi-finals. We can win the tournament, but I’m not saying we will.”