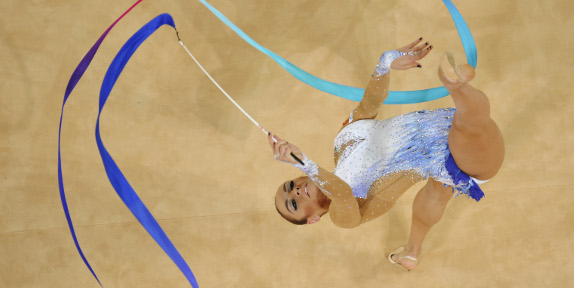 The Individual line-up at the Burtasy Palace of Sport includes Russian stars Evgenia Kanaeva, Daria Kondakova and Daria Dmitrieva and their main challengers Liubou Charkashyna (BLR), Aliya Garayeva (AZE), Anna Alyabyeva (KAZ) and Ulyana Trofimova (UZB). In the Group competition the host country will again be strong favourites while Japan, Poland and Uzbekistan will battle it out for podium places. The All-around competition is scheduled for Saturday while the Apparatus Finals are on Sunday.

The 2012 FIG World Cup circuit in Rhythmic Gymnastics includes one Category A event (Sofia) and six Category B events. Apart from Corbeil-Essonnes (Individuals only), all events include both Individual and Group competitions, with All-around competitions serving as qualifiers for the Apparatus Finals.

The world ranking points collected by competitors at their best four events of the circuit will add up to a total, and the top scorers in each discipline will be crowned the winners of the overall series at the final event in Minsk.

Participation in Category A World Cups is limited to a maximum of two Individual gymnasts and one Group per federation, while invitations are restricted to federations with Individual gymnasts among the top 18 (C I, All-around) and the best 12 Groups from the 2011 World Championships, with an additional wild card for the host country if not represented.

Category B World Cups are open to all FIG member federations. Countries with gymnasts in the top 40 at the 2011 World Championships are entitled to participate with two Individual gymnasts; all other federations are allowed one gymnast only. All federations are entitled to enter one Group. In addition to the places listed above, the current All-around champions of the Olympic Games, World and Continental Championships are invited to both A and B World Cups.

At Category A and B World Cups, both Individuals and Groups, the best eight in the All-around competition qualify for the Apparatus Finals. In the event of failure to qualify, the host federation may participate in one Individual Final of its choice.

The world ranking points collected by competitors at their best four events of the circuit will add up to a total, and the top scorers in the All-around and per Apparatus will be crowned the winners of the overall series at the final event in Minsk.