All three players from Chinese Taipei contributed to the 3-2 victory over Hong Kong this afternoon in Westfalenhallen, Dortmund. For Chinese Taipei, tomorrow is another duel against an Asian opponent. Chuang Chi-Yuan and his teammates will play against Korea Republic.

Austria, who beat Poland 3-0, will play this Friday’s Quarterfinals against Germany, the favourite to reach the Semi-finals. Finally, China, reigning world champion, will face the determined Sweden who won a clear 3-0 victory against Portugal. 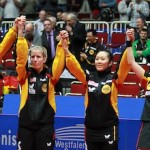 Poland continues its excellent streak in the LIEBHERR World Team Table Tennis Championships 2012 in Dortmund. The Polish women have dominated Romania 3-2 and will face, in the Quarterfinals, the Chinese Team that is certainly aiming to win the title on Sunday 1 April 2012 in Dortmund.

The other European-European match was Austria against Netherlands. The Orange, reigning European champion four times in a row, won 3-1 and will have now the difficult task of challenging Japan.

Korea Republic did not falter against Hungary. They beat Hungary 3-0 and will confront Hong Kong on Friday.

Germany, with home support, overcame the impressive DPR Korea Team 3-1. The host country must excel expectations of they are to reach the Semi-finals as they did in Moscow in 2010. They face defending World Champions Singapore at 07.00 pm.

Caption Image-1: Singapore Men’s Team are in the Quarterfinals for the first time.

Caption Image-2: German Team did well against Korea DPR in front of a delighted home crowd. Photos by Remy Gros.