Olympic bronze medallist Brady Ellison of the USA won an unparalleled fourth Hyundai Archery World Cup title in Odense, Denmark, at the close of the 2016 international archery season. He beat Sjef van den Berg, of the Netherlands – who finished fourth at Rio 2016 – in a nail-biting, one-arrow tiebreaker.

The win puts him two ahead of anyone else in number of World Cup Champion titles. 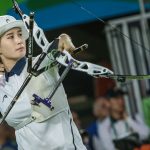 Compound titles were taken by Marcella Tonioli, of Italy, and world number one Mike Schloesser in front of Odense Castle, in the centre of the City of Odense.

Longines Prize for Precision Winners (Given to the athletes with the most 10s throughout the competition season.)
• Recurve men: Brady Ellison, USA
• Recurve women: Tan Ya-Ting, Chinese Taipei

The Hyundai Archery World Cup included stages in Shanghai, China; Medellin, Colombia and Antalya, Turkey in 2016 and concluded in Odense, Denmark on 24/25 September.

World Archery President Prof Dr Ugur Erdener said: “Congratulations and thank you to the champions that gave us another exciting finish to another fantastic year of the Hyundai Archery World Cup under wonderful weather conditions at the Final in King’s Gardens in Odense, Denmark. It was the perfect way to cap an Olympic year that saw new highs in interest in archery at the Games, and helped to capitalise on the wave of energy the sport received from Rio.”

“Odense Palace, the backdrop behind our targets, joined a long list of iconic venues used to host our international archery events, which has included the Eiffel Tower in Paris, the Bosphorus in Istanbul and the Zocalo in the centre of Mexico City.”

“A combination of incredible sport and dramatic location is what makes the Hyundai Archery World Cup such a success.”

“It has been a pleasure to see how this event has moved some of the world’s best athletes out into the urban space, where many locals could stop by and experience the athletes up close and feel the rush of archery.”

“More than 400 primary school students also participated in a school tournament in the week leading up to the World Cup Final. Hopefully these young students will take a special interest in archery in the years to come.”. —- WA