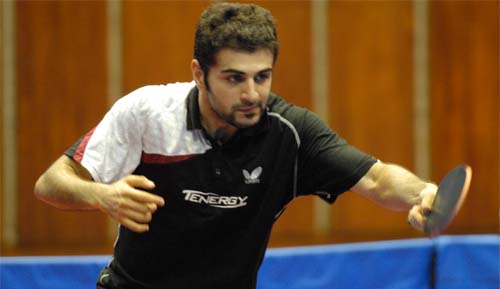 Safely through to the penultimate round, on the concluding day of action, Noshad ALAMIYAN accounted for Belgium’s Yannick VOSTES, the no.5 seed in four straight games (11-5, 13-11, 11-7, 11-2), before clinching the title by recording a nail-biting victory over Kuwait’s Ibrahem AL-HASAN.

A well earned victory, Ibrahem AL-HASAN, the no.7 seed, was very much the man in form.

On the concluding day matters went as per status in the Men’s Singles event; it was the same in the counterpart Women’s Singles competition.

Matilda EKHOLM, no doubt smarting somewhat from the fact that her Olympic aspirations had not been endorsed by the Swedish National Olympic Committee, beat two Olympians to clinch the title, both Spanish.

Polina MIKHAILOVA has now competed in all four ITTF Euro-Africa Circuit Tournaments; in Rabat it was the first time she has not reached the Women’s Singles final.

She won in Belarus capital city of Minsk, whilst being the runner up in both Zagreb and Helsingborg.  —–ITTF Press Release & Photo by Rachid Berrada.