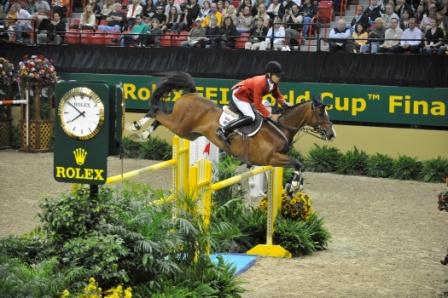 Two separate leagues take place on the North American continent. The East Coast league began at Blainville in Quebec (CAN) last July, while the West Coast league kicked off at another Canadian fixture, Langley CSI2*-W, a month earlier. A total of four groups of athletes can qualify from this region – two from Canada, another two from Mexico, three from the USA West Coast League and seven from the USA East Coast series. And many of the riders who have made the cut for this season’s decider are big names that are likely to make their presence felt when the action gets underway at the Brabanthalle on 19 April.

Canada however will send only one representative, it has been confirmed today. Ian Millar, who recorded a memorable back-to-back double of wins with the glorious Big Ben back in 1988 and 1989, and a man on top of his form right now after a great run at the 12-week Winter Equestrian Festival in Florida (USA), headed the Canadian qualifying list along with Chris Pratt. But these two have opted not to travel so, in their place, it is Belgian-based 2008 Olympic Champion, Eric Lamaze, who will fly the Canadian flag. Always a formidable competitor, Lamaze turns 44 just two days before the 2011/2012 Rolex FEI World Cup™ Final begins, so success at the Dutch fixture would make for the perfect birthday celebration.

The top two Mexican riders, still unconfirmed to start, are the experienced 49-year-old Antonio Maurer, a veteran of the 2000 Olympic Games in Sydney (AUS), the Alltech FEI World Equestrian Games™ in Lexington (USA) in 2010, and a team bronze medallist at the 2011 Pan-American Games in Guadalajara (MEX). Maurer finished fifth in last weekend’s Tampa qualifier riding Callao, while his fellow-countryman, Everardo Hegewisch Diaz Infantes, competed in six legs of the series with his top ride, Electric 2.

The US qualifying places are particularly hard-won, with competitors of the highest calibre keen to book their spots at the Rolex FEI World Cup™ Jumping Final. And it was Margie Goldstein-Engle who topped the 12-leg USA East Coast leader board. She lined out at 10 qualifying events, and was victorious at Harrisburg in Pennsylvania last October and in Wellington, Florida in both November 2011 and in February of this year, partnering the strong grey, Indigo, on each occasion. A 10-time winner of the American Grand Prix Association’s Rider of the Year Award, individual gold medallist at the Pan-American Games in 2003 and team silver medallist at the FEI World Equestrian Games™ in 2006, she finished 12th with Indigo at the 2010/2011 Rolex FEI World Cup™ Final in Leipzig, Germany last April. And the lady who turned 54 last Saturday (31 March) and who has been described by US Chef d’Equipe, George Morris, as “a fighter and a trier – she never gives up!”, looks set to pose an even stronger challenge this time around.

With the top seven results taken into account, Goldstein-Engle finished a full 17 points ahead of her nearest rival, Michelle Spadone, and these two are confirmed starters for the Final. But while Mario Deslauriers, winner of the 1984 FEI World Cup™ Jumping trophy when competing under the Canadian flag, finished third on the league table, he will not come to Europe. Next in line, McLain Ward, has decided likewise as he is just back in the saddle this week having made a speedy recovery from the broken knee he sustained in a fall while competing on the Florida circuit in mid-January. The final representative from the East Coast will therefore be Charlie Jayne, while Russia’s Ljubov Kochetova, who finished seventh on this league table, has qualified as an extra athlete.

It was Richard Spooner who swept to success in the 16-leg West Coast series, again dominating by a strong winning margin of 14 points. Like Goldstein-Engle he competed at 10 events during the season, and on every occasion partnered the brilliant Cristallo who headed the line-up at Langley (CAN) last August, and Lexington (USA) in November and who was runner-up at both Spruce Meadows (CAN) in September and again in Wellington (USA) last month. Cristallo is the perfect partner for the man who has rightly earned the nick-name “The Master of Faster”, and whose idol is Austria’s Hugo Simon, winner of the very first FEI World Cup™ title back in 1979 in Gothenburg, Sweden. And 41-year-old Spooner was also well-placed at last year’s Rolex FEI World Cup™ Jumping Final in Leipzig (GER) where he finished seventh.

Spooner is joined on the West Coast qualified list by 52-year old Rich-Fellars, who was runner-up with his great Irish-bred stallion Flexible at the 2008 FEI World Cup™ Final in Gothenburg (SWE), and Francie Steinwedell-Carvin, who fought a long campaign with Taunus this season during which they won the qualifying leg at Rancho Murieta, California (USA) in November. Image © FEI/Kit Houghton