Philadelphia, Oct 18, 2014: Malaysian superstar Nicol David claimed the latest historic achievement in her illustrious squash career when she beat Egypt’s Nour El Sherbini in the final of the Women’s Delaware Investments US Open in Philadelphia to become the first player in the 60-year history of the championship to win the title three times in a row.

The top seed and the world number one for 99 successive months since August 2006, David was expected to make the final of the WSA World Series Platinum event at Drexel University – the 95th of her career.

But El Sherbini was the event’s No7 seed – and scored mighty upsets over both second seed Laura Massaro, the world champion from England, and France’s fourth seed Camille Serme to claim her unexpected place in the climax. 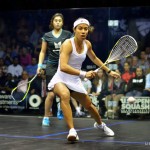 With heavy strapping on her right thigh, the Egyptian teenager looked to be struggling with her movement in the first game as David (pictured above in action with El Sherbini) pushed her to all corners of the court.

“For the next two games, however, the 18-year-old from Alexandria matched David all the way,” said a spokesman for the event. “Looking calmer and more controlled, El Sherbini was moving better, hitting better, and we had a real contest on our hands.”

El Sherbini was a point or two ahead for most of the second, but it was David who reached game ball first at 10-9, doubling her lead at the second attempt, 12-10, as the Egyptian’s dropshot clipped the tin.

From seven-all in the third, El Sherbini moved ahead to earn three game balls at 10-7. But David is renowned for comebacks, and forced into three errors from the Egyptian before reaching match-ball.

But as the 31-year-old world number one from Penang served for the match, the ball burst – delaying the final point as the new one was warmed up.

Minutes later, however, David blasted a shot out of El Sherbini’s reach to claim her third US Open title.

“Sherbini played such a good game of squash, and I really had to play even better because it was so difficult out there to win that title.

“I think with Sherbini it’s more of just getting in the groove. I think in the second game she just found the rhythm and flow, and also just good shots and she was really putting on the pressure. So I had to keep up with that pace and, at the same time, bring my game forward so I’m really pleased with that.

“I’m so pleased – really happy to win another US Open.”