Home  »  OTHER SPORTS   »   Mouth-watering clash between British Lionhearts and Germany 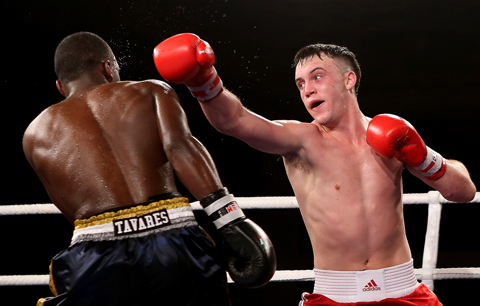 Lausanne, Dec 13: After their humbling defeat away to Kazakhstan in week three, the British Lionhearts have recalled their big names for the battle versus German Eagles in London this Friday 14 December (20:00 local time) at Earls Court. Welsh wizards Andrew Selby and Fred Evans, along with Joe Ward, Joseph Joyce and WSB debutant Sam Maxwell will all want to get their team back to winning ways before the winter break.

The first bout of the evening will be the Lightweight (57-61kg) showdown between Great Britain’s Maxwell and Germany’s rampaging 25-year-old David Oliver Joyce. It promises to be a rough introduction to life in WSB for Maxwell, who will have to be on top of his game against the dangerous Irishman. Joyce has two seasons now under his belt and boasts a 3-1 record in the competition, with his only defeat one of the narrowest in WSB history, with two judges scoring the bout as a draw. The two will know each other inside out so it will be close.

Joyce told WSB, “I know Sam very well; he is a top class boxer. He is a good puncher so I will need to constantly be on my toes. I am more experienced in this competition and want the victory to repay the faith shown in me by the German Eagles”.

Afterwards, it will the turn of the Light Heavyweights (80-85kg) to take to the ring with European and former Youth World Champion Ward set to battle 22-year-old German Satula Abdulai. The Eagles’ orthodox fighter is a late replacement for Kevin Künzel, who withdrew through injury. Teenager Ward, one of the most exciting talents on the planet, looked at ease in the pro format, completely outclassing Imre Szello in his previous outing. Abdulai on the other hand, represents an unknown quantity. The Lionhearts’ accomplished Irishman should dominate this one.

2011 AIBA World Championships silver medallist Selby will then lock horns with French pro boxer Redouane Asloum at Bantamweight (50-54kg). 23-year-old Selby is, to many, one of the most technically gifted boxers in the world, constantly switching stance, he has the ability to throw sublime shots from almost any angle. The experienced 31-year-old Frenchman will have to box at his counter-punching best in order to put pressure on Selby with the odds favouring the home team’s speedy fighter.

At Middleweight (68-73kg), it will be 2012 Olympic silver medallist and European Champion Evans versus German newcomer Vjaceslav Kerber. The Welsh southpaw is fast and furious, and has a vast repertoire of shots in his arsenal. He is however susceptible to lapses in concentration which can leave him exposed; the 21-year-old though should be too strong for his opponent here.

The show will be brought a close when the home team’s Joyce faces Philip Grüner at Heavyweight (91+kg). The tall British 27-year-old orthodox boxer looked really controlled in his previous outing for the team, dominating seasoned pro Matteo Modugno. Grüner, it is expected, will be in damage limitation mode in this one.

Joseph Joyce was bullish about this bout, stating, “I am not worried, some nervous excitement maybe, but I am confident that I am ready. I have had plenty of sparring to prepare, with Anthony Joshua as my partner, so I have been training with the very best. I have loads of people from my boxing club coming to Earls Court to watch me; it will definitely give me the edge”.

Eagles Head Coach Valentin Silaghi was looking forward to the match, declaring, “We have worked hard to give our boxers the best possible preparation for this one. After lots of video analysis, we came up with a gameplan for each boxer. The aim will be to counter the threat posed by this fantastic British Lionhearts team. We are a tight knit group and are highly motivated for this match. We are ready”.

With their fearsome quintet, the British Lionhearts will want to do the business in front of their expectant crowd. The German Eagles have two debutants in their ranks so should struggle to contain the power of their opponents. —- WSB