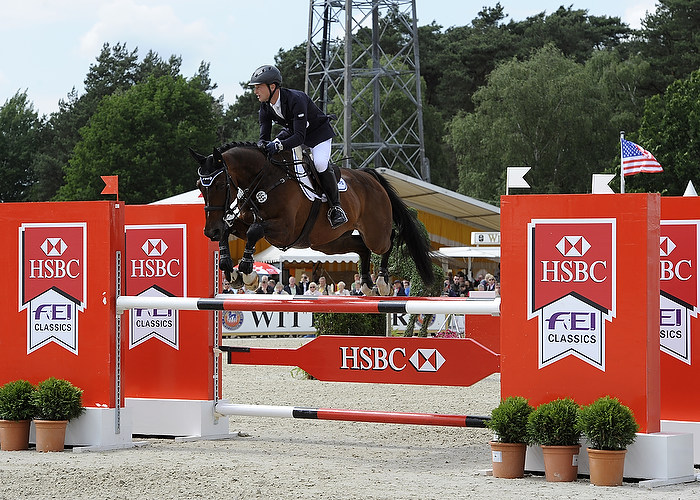 Lausanne (SUI), June 17, 2012: Michael Jung (GER), riding Leopin FST, added yet another accolade to his glittering career when he won the CCI4* at Luhmühlen (GER), the penultimate leg of the HSBC FEI Classics™, much to the delight of a loudly cheering home crowd.

Earlier in the day he had won the German national title with Weidezaunprofi’s River of Joy, and his assured performance over the weekend will make him an obvious favourite to win gold at the London Olympic Games in six weeks’ time – the Jumping phase even takes place on Jung’s 30th birthday, July 31.

“It’s very nice to be sitting here,” said Jung. “I have some wonderful horses that are in great form. Leopin was fantastic on the Cross Country and it is nice to know that he can do everything. I just made a little mistake in the Jumping, coming in too fast to the combination, where we had four faults.”

The Jumping phase at Luhmühlen, on an all-weather surface in the revamped main arena, proved influential, with a tight time, and there was some re-arranging of the top 10 placings.

Dressage leader Lucinda Fredericks (AUS), fourth after Cross Country on Flying Finish, picked up just two time penalties to move up to second place when Andrew Hoy (AUS) and Oliver Townend (GBR), lying second and third respectively, hit an unfortunate three rails apiece. Hoy dropped to sixth place on Rutherglen and Townend to eighth on Armada, just behind his other ride, Sonas Rovatio, on which he had jumped clear for seventh place.

Others who benefitted from Hoy and Townend’s slide down the placings were Andreas Dibowski (GER), who went clear to finish third on FRH Butts Avedon, Andrew Nicholson (NZL), who rose a place to fourth on Calico Joe with one fence down, and Charlotte Agnew, for whom it was a career best. She jumped clear but incurred four time faults on Out Of Africa Two and went up a place to fifth.

Fredericks, the best of the four Australians who finished in the top 10, was spending another night at Luhmühlen to trot her horse up next morning for the selectors, who are due to announce the Olympic team this week. “I’ve had a fantastic week,” she said. “My horse has only been Eventing for two years, but he seems to find it easy. I feel such respect for him. He tries so hard and wants to do right for me. I just hope the selectors are impressed!”

Fredericks also had plenty of praise for the organisers of Luhmühlen. “The facilities here are the best in Europe. Everyone is so friendly and helpful which means that the riders can relax and concentrate on their horses, and the grooms are very happy too.”

Jung’s convincing victory at Luhmühlen, which shows the strength in depth of his horsepower, takes him into third place in the HSBC FEI Classics™, behind Andrew Nicholson. Although the New Zealander’s weekend didn’t go entirely to plan, he has still closed the gap between himself and the leader, William Fox-Pitt (GBR), to six points, thus ensuring an exciting finale to the series at the Land Rover Burghley Horse Trials (August 30-September 2).

Megan Heath (NZL), 35, who finished 15th at Luhmühlen with St Daniel, won the US$1,000 HSBC Training Bursary for the best CCI4* debut performance. The achievement was all the more noteworthy because Heath lives in London, where she works full time in banking, and only started Eventing two years ago, finishing 10th on St Daniel in the CCI3* at Ballindenisk (IRL) in February.

Previously, she kept a Jumping horse with fellow New Zealander Grant Wilson in Belgium, commuting at weekends to compete for fun, but temporarily gave up riding altogether six years ago due to pressure of work. She bought St Daniel from German Olympic gold medallist Peter Thomsen, who was on hand at Luhmühlen to walk the Cross Country with her. Heath’s compatriots Mark Todd (NZL) and Andrew Nicholson (NZL) also provided plenty of advice.

“If I’d known in advance I was going to finish 15th, I’d have been thrilled,” said Heath. “Now, of course, in hindsight, I keep thinking about all the things I could have done better. I certainly need to improve my Dressage and I’m going to do more running in future – when I got to eight minutes on the Cross Country, there still seemed a long way to go. But I wasn’t over-awed by the course, probably because I didn’t have anything to compare it to, and I knew my horse was brave and honest.” Heath said she was going to contemplate her next major outing on the flight home, but was considering Pau (FRA) in October.

Michael Jung (GER), 29, has become renowned as an outstanding and sympathetic horseman who is also successful in Grand Prix-level Jumping and Dressage. He is best known in Eventing for his highly successful partnership with La Biosthetique Sam. They won Luhmühlen in 2009, Jung’s CCI4* debut, plus the FEI World Cup™ Eventing Final at Strzegom (POL) and an individual bronze medal at the HSBC FEI European Eventing Championship at Fontainebleau (FRA).

In 2010, Jung headed the FEI World Cup™ Eventing leaderboard and he won the individual gold medal at the Alltech FEI World Equestrian Games™ in Kentucky (USA). Last year he led the German team to its first ever European team gold, at Luhmühlen. He also won the individual gold and thus became only the fourth rider in history (following Mary Gordon Watson, Ginny Elliot and Zara Phillips) and the first German to hold world and European titles simultaneously. Leopin FST was retired on the Cross Country at Luhmühlen last year but won the CIC3* at Fontainebleau (FRA) in March. Jung had originally planned to make his Badminton debut with the horse in May, but the event was cancelled.

HSBC FEI Classics™ 2012 Leaderboard (after 4 out of 5 events, due to cancellation of Badminton):

At the centre of HSBC’s sponsorship is a commitment to the development of Eventing at every level. As part of its support of the HSBC FEI Classics™, HSBC has introduced a Training Bursary. This is a unique award which is presented to the highest placed rider never to have completed a 4* event prior to 1 January 2011. The winning rider receives a training voucher to the value of US $1,000, which is spent on sessions with a trainer of the athlete’s choice approved by the FEI and the relevant National Federation. Further information can be found here: http://www.fei.org/hsbc/hsbc-training-bursary —- (Photo: Peter Nixon/FEI)