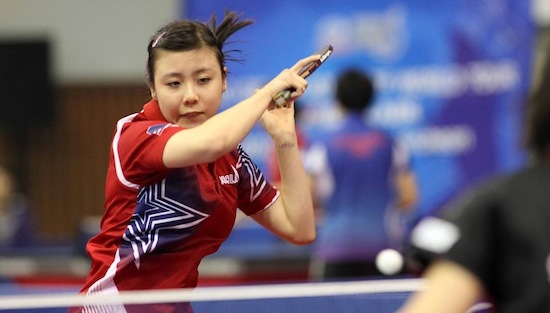 Rabat – Morocco, Dec 1, 2013: The most important international junior table tennis event of the year, the 2013 ITTF World Junior Championships, has kicked off today in Rabat, Morocco.

This will be American superstar Ariel HSING‘s last World Junior Championships. HSING, who has such a close relationships with Bill Gates and Warren Buffet that she calls them ‘Uncle Bill’ and ‘Uncle Warren’, will graduate to the senior level after this championships.

The Princeton University student who recently turned 18 stated: “I’m really excited for this event! This will be my last world junior championships, so I definitely want to make the most out of it. I am going to try my best and fight for every point. I really hope our team can bring back a medal for the US!”

“Playing world juniors has really raised my standards in table tennis. When I was younger, I was amazed at the high level of play that the older kids had and I wanted to be like them one day! I thought, ‘If they could do it, then I could too.’ I am really thankful for ITTF for having this event” concluded the 2012 Intercontinental Cup Champion, who also represented the USA at the 2012 London Olympic Games.

HSING will definitely need this determination to finish her junior career on a high, especially with such a stellar field participating in the 12th World Junior Championships. Names such as 13-year-old sensation Japanese Mima ITO, who has won 94% of her junior matches this year, and number one seed GU Yuting of China will be in the mix for medals come next Sunday.

The leader of the GAC Group World Tour under-21 standings Masataka MORIZONO of Japan is the hot favourite for the boy’s singles title, following in the illustrious footsteps of former Japanese winners Kenta MATSUDAIRA (2006) and Koki NIWA (2009).

Every player here in Morocco will have a renewed sense of belief of the power of youth after seeing last year’s boys singles champion FAN Zhendong (China) setting the senior world of table tennis alight. FAN not only became the youngest ever player to win a GAC Group 2013 World Tour event at the age of 16, but has gone on to win another two since, beating the Olympic Champion ZHANG Jike (China) and world number two XU Xin (China) along the way.