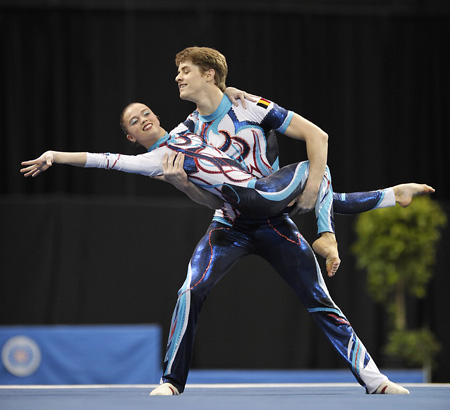 LAKE BUENA VISTA (USA), FIG Office, April 17, 2012: Russian acrobatic gymnasts ruled three of the five disciplines Monday during the first day of qualifying at the 23rd Acrobatic World Championships at Disney World’s ESPN Wide World of Sports Complex’s HP Field House. Going into the second and final day of qualifications, Russian acrobats are in first place in the men’s and women’s group events, while veteran men’s pair Konstantin Pilipchuk and Alexey Dudchenko gave a strong performance to lead the field in that category. 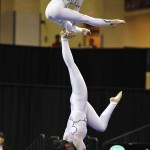 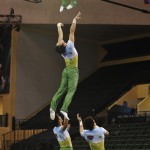 2010 World women’s group gold medalists Aigul Shaikhutdinova, Ekaterina Stroynova and Ekaterina Loginova jumped out in front of the 20 country pack from with first routine, a showy, jazzy musical number with male vocals that showed a mastery of complex balancing positions. Their dynamic follow-up exercise was equally strong, and the Russians ended the day seemingly in good position to qualify for Wednesday’s final in first position, leading the pack with 56.813 points. Just behind, is Belgian trio Sanne van Overberghe, Lara Schollier and Camille van Betsbrugge, who tallied 56.007 for their balance and dynamic exercises. Russia’s second trio — Natalia Solodinina, Victoria Sukhareva and Maria Golovina also put together two visually stunning and nearly error-free routines to finish in third place with 55.342 points.

Unfortunately for Russia, only one pair per country can qualify to the finals, which might be good news for Belarus’s Yuliya Khrypach, Hanna Sukhareva and Julia Kovalenko, who are sitting fourth at the moment, having scored 54.811 total for their balance and dynamic exercises. Bolstered by the support of a raucous crowd that included several World age group competitors, the U.S.’s Sienna Colbert, Holli Morris and Crystal Johnston ended the day in sixth position (54.392), trailing Britain’s Liliana Walduck, Casey Morrison and Amber Campbell-White (54.667) by just 0.275 with the combined exercise still to be performed. 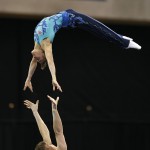 The two Russian men’s teams outshone the favorite Chinese, who stunned many in Lake Buena Vista with their difficulty and finesse during the podium training sessions. China’s top group — Jian Tang, Lei Wang, Yi Zhou and Yeqiuyin Wu — were the first to perform and showed a remarkable exercise with an enormous amount of difficulty, only to receive a 0.5 penalty for inappropriate attire on the grounds that their colorful costumes were too theatrical.

That left the elegant and powerful Russia 2 quartet (Artur Avakian, Konstantin Stetsenko, Grigory Sergienko and Yuriy Gerasimov) to seize the lead, which they did by scoring 27.818 points. Just behind them was Russia 1, another strong team that includes 2008 World men’s gold medal group members Maksim Chulkov and Anton Danchenko, who are now working with Dmitry Bryzgalov and 15-year-old top Valentin Chetverkin in a group. Russia 2 scored 27.631, giving both groups a small margin for error in Tuesday’s balance exercise as only one group will advance to the final.

Great Britain’s men’s group (Dorian Walker, Jesse Heskett, Matthew Evison and Richard Hurst) posted 27.59 points with a powerful and entertaining exercise, good enough for third at the moment (27.59) followed by China’s second group (Sheng Fang, Weiming Feng, Tong Zhou and Teng Zhang) who brought the house down with their kung-fu themed performance, which included several Jaeger catches in rapid succession. China 2 scored 27.456, less than 0.4 behind the leaders. In spite of the leaderboard, the six groups to advance to the men’s group final is far from decided. Going into the second round, less than 0.6 separates first place Russia 2 from ninth place China 1.

Russia’s Konstantin Pilipchuk and partner Alexey Dudchenko performed an intricate routine featuring several difficult throws, all well executed, to take the lead with 28.0 points in the men’s pairs category. Though the duo, silver medalists at the 2010 World Acrobatic Championships in Wroclaw, Poland, did not have the highest difficulty score among the 14 groups to perform, they received the highest marks in both the execution (9.1) and artistic (8.9) categories. At 26, Pilipchuck is one of the oldest “tops” at this World Championships and one of the few past puberty, However, at 92 kg (203 pounds), his partner Dudchenko is very capable of lifting him up and throwing him in the air!

British veterans Edward Upcott and new partner Adam McAssey, both World Acro champions in their own right and longtime training mates, teamed up to give a masterful performance that came within striking distance of the Russians (27.802). Upcott and McAssey, both members of the Britain’s Got Talent-winning group Spelbound, plan to retire following this competition and pursue other endeavors. Coming third with their first routine was Belarus’s Ruslan Fedchanka and Yauheni Kalachou, who scored 27.503 points.

Though several Russian teams are in the lead, it was also a good day for Belgium, which is emerging as an Acro superpower. Laure de Pryck and partner Nicolas Vleeshouwers brought the house down with two exceptionally well choreographed routines that made the most of their personal chemistry and dance abilities. De Pryck and Vleeshouwers combined for 56.95 points to lead the mixed pairs race. In addition, the women’s group is currently in silver medal position, while the entertaining men’s foursome (Tom Boons, Sebastian Boucquey, Arne van Gelder and Kevin de Meyer) dance-stepped and swung their way to sixth overall going into the second day, meaning they have a good chance of making finals.

Right behind the Belgians in mixed pairs are 2010 World mixed pairs silver medalists Tatiana Okulova and Revaz Gurgenidze, who finished second with 56.802 after showing a powerful and polished balance routine. Gurgenidze, who won gold medals at the 2005 and 2006 Acro Worlds with former partner Ana Katchalova, performs with gusto and determination that makes it clear he’s hunting for the title.

Meanwhile, China’s dainty Yunyun Shen and partner Qi Liu put together two incredibly polished routines to score 55.415, good enough for third at the moment, while Portugal’s Giancarlo Roque and Sofia Rolao made a strong impression with their sets for fourth place, tallying 55.405. Ukraine’s Inna Batuyeva and Denys Iasynskyi, who impressed during podium training, suffered a fall during their first performance but came back strong with their balance exercise, a strength of the balletic, flexible Batuyeva, to climb from ninth after the first routine into seventh, keeping hopes of making the final alive.

There was another highlight for Great Britain, where Acro has gained popularity since Spelbound’s TV exploits: women’s pair Poppy Spalding and Alanna Baker are currently first, ahead of defending World champions Anastasiya Melnychenko and Kateryna Sytnikova of Ukraine. The margin — 28.257 to 28.231 — isn’t huge, but it’s a coup for Team GB. Belarus’s Yana Yanusik and Sviatlana Mikhnevich are currently third after posting 27.609 for their balance routine.

Competition continues Tuesday in Lake Buena Vista with the second day of qualifying for all competitors, with finals for the top six or eight teams — depending on number of entries per discipline — happening Wednesday.